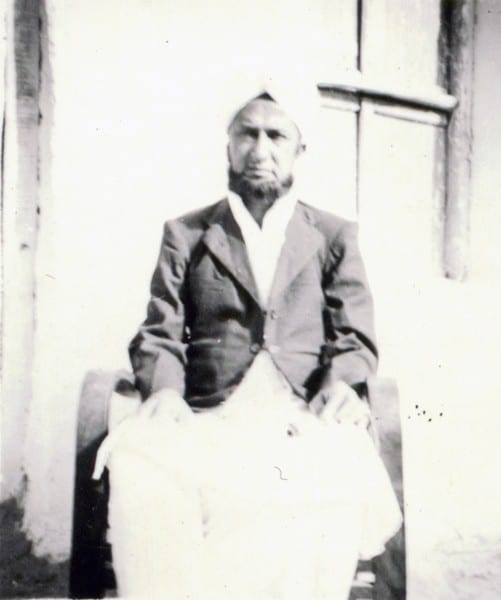 Sultan ul Auliya Sultan Mohammad Abdul Aziz rehmat-ul-Allah alayh holds the status of  29th Shaikh of Sarwari Qadri order. He was born on March 12, 1911 (12th Rabi al-awwal 1329 Hijri) in Garh Maharaja, Jhung, Pakistan. His lineage links back to Sultan Bahoo in eighth generation. He was born circumcised and with cut naval which are signs that he was undoubtedly a Saint by birth. His father, Sultan Fateh Mohammad was a Dervish and Mystic.

After birth Sultan Mohammad Abdul Aziz did not open his eyes until the seventh day. His father worriedly took him to the shrine of Sultan Bahoo. At that time Sultan Pir Sayyid Mohammad Bahadur Ali Shah was coincidently present there. Sultan Fateh Mohammad requested Pir Bahadur Ali to bless his son so that he would open his eyes. As soon as he (Pir Bahadur Ali Shah) held the baby in his lap, the baby opened the eyes. In this way, his first view  was his spiritual guide’s countenance.

Since childhood Sultan Mohammad Abdul Aziz had a lustrous grace in his personality. Hence, whoever met him, got impressed by his personality and morals. He was a quiet, graceful and solemn person. So much so, he always avoided unnecessary activities, games and gossips. Instead, he spent most of his time in devotions and meditation.

When Sultan Mohammad Abdul Aziz was twenty-one years of age he took oath of allegiance at the sacred hands of Sultan Pir Sayyid Mohammad Bahadur Ali Shah. He afterwards, dedicatedly served his spiritual guide. He honoured his spiritual guide so much that he never rode a horse or any vehicle while going to meet him. Once he travelled hundred kilometers on feet to reach his spiritual guide and resultantly had blisters on his feet.

Sultan Mohammad Abdul Aziz’s mystic poetry is full of great adoration for his spiritual guide. Even after death of Pir Bahadur Ali Shah, he used to stay at his shrine very often.

The ardent love for his murshid annihilated Sultan ul Auliya in his Murshid and elevated him to the level of beloved. Hence, he proved himself eligible for the Trust of Faqr. Thus, Pir Bahadur Ali Shah entrusted the treasure of Faqr to him. Afterwards, he devoted the rest of his life in guiding seekers of Allah on the path of Faqr (Sufism).

Among his attributes most highlighting were punctuality, patience, solemnity and above all great devotion for Allah Almighty.

Who did Sultan ul Auliya pass the treasure of Faqr?

It was destined from eternity that Sultan Mohammad Abdul Aziz will pass on the heritage of Faqr to his son Sultan Mohammad Asghar Ali who adorns the status of Sixth Sultan ul Faqr. Hence, he did not have to search for the heir of Divine Trust.

Sultan Mohammad Abdul Aziz died on April 12, 1981 (7th Jumada ath-thani, 1401 Hijri). His shrine is half kilometer away from the shrine of Sultan Bahoo in Garh Maharaja, Jhung, Pakistan.

Comprehensive book on the life of Sultan ul Auliya

This book is an English translation of the book ‘Mujtaba Akhar Zamani’ which is written by the present Saint of Sarwari Qadri order Sultan-ul-Ashiqeen Sultan Mohammad Najib-ur-Rehman.