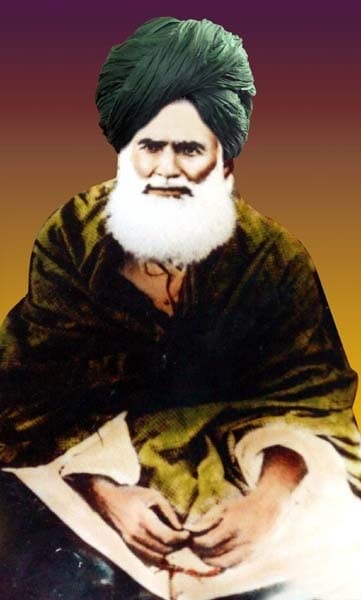 Since childhood, Abdul Ghafoor Shah was completely inclined toward religion. Till the age of eighteen years, he had acquired almost entire religious education. Even then his soul was restless and his urge to find the Divine path was increasing day by day. At last, at the age of twenty-five years he had the privilege of seeing the Holy Prophet, Sultan ul Faqr 5th Sultan Bahoo and Sultan ul Faqr 3rd Shaikh Abdul Qadir Jilani in a dream. Thereby, the Holy Prophet ordered him:

After the death of his beloved spiritual guide (Murshid), Abdul Ghafoor Shah migrated to Shorkot in 1861.  Afterward, he went to Mud Sharif, District Jhung, Pakistan (then India) in 1862. There, he guided thousands of seekers of Allah on the Divine path. Thus, he remained stationed in Mud Sharif for about fifty years. Thence, he blessed people with the beneficence of Faqr and invocation of Ism-e-Allah Zaat till the end of life.

Sultan ul Sabireen’s son Pir Abdul Haq compiled his poetry which is full of devotion and love for his spiritual guide Sultan ul Tarikeen Sayyid Mohammad Abdullah Shah. Certainly, his mystic poetry is a masterpiece of expression of Divine realities.