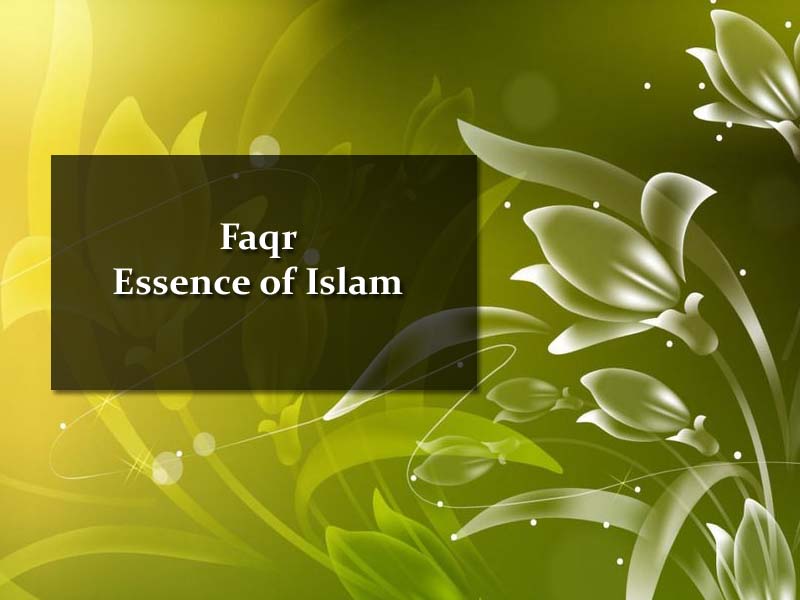 Meaning: It does not matter if Europe resents the word ‘Islam’. Indeed another name for the same religion is ‘Faqr’, the most honoured.

Allama Iqbal elucidated in the above verses that if Europe has enmity with the name of Islam then another name of Islam is Faqr and this is the true Islam.

What is Faqr? It is the real legacy of Prophet Mohammad. Its beginning as well as accomplishment lies in sharia.

Faqr is to Islam as soul is to body

Indeed, Faqr is the soul of Islam. As human body is dead and worthless without a soul, likewise Islam is nothing without Faqr. Similarly, Faqr is like the nut of almonds whose chief substance is under a cover. In brief, the outer cover of Faqr is sharia. Moreover, Faqr is similar to sun; as sun provides energy and food to the plants and illumines every part of the earth, in the same way Faqr illuminates Deen.

Faqr is a sun

Meaning: If sun hides, it will cause desolation in the universe. In fact, Faqr is the sun which imparts blessings and bounties. (Mehak-ul-Faqr Kalan)

Golden words of Prophet of Islam

The Lord of the universe, Holy Prophet says:

Faqr in the light of a perfect Fakir’s teachings

Faqr Is Pride of Prophet Mohammad

Golden words of Junayd of Baghdad

Nizamuddin Auliya describes the splendour of Faqr as:

In the words of Allama Iqbal

Allama Iqbal also termed Faqr, the real Islam. As per him Faqr is real legacy of Prophet Mohammad.

Divine Closeness Is Possible In Faqr Only

Faqr Is the Way of the Pious

From these golden sayings it is as clear as sun that Faqr is in fact the essence of Islam. It has been the way of perfect Saints and our righteous ancestors to gain Divine closeness. But contemporary scholars and westernised classes, due to their ignorance of this Divine knowledge, have shifted the attention of the masses from this path to superficiality. Resultantly, common people have forgotten the relation of the soul and Allah. They have tangled themselves in physical deeds and external prayers. Our Holy Prophet has declared Faqr his pride. It is ironically sad that nowadays, Muslims are as ignorant and unfamiliar to Faqr as Non-Muslims.

Allah had blessed the Holy Prophet with innumerable marvels, qualities and virtues. But he never expressed pride on any of his virtues; neither on faithfulness, justice, piety or beauty, nor on munificence, renunciation of the world and submission to the Divine will except Faqr.

Holy Prophet said it from his own sacred tongue:

Faqr is a gift

Nowadays how can a Muslim understand the reality of Faqr, the soul of Islam? Whereas, he considers offering prayers five times a day, fasting in the month of Ramadhan along with other outward prayers as complete religion, and keeps discussing his small good deeds. While the Holy Prophet has narrated this fact:

Faqr & the pillars of Islam

The veritable reality of sharia is gained only by treading the path of Faqr. Veils of baser innerself can only be removed by travelling through it and true seeker gains proximity and Divine vision. Only then he would offer his prayers with true essence. In fact every worship is relishing and a source of tranquility only after Divine proximity and vision. One can achieve this level only treading the path of Faqr.

Oneness of Allah is the fundamental principle of Islam. Its meanings are very simple and facile for masses whereas Mystics have their own deep meanings. One who is reciting shahadah by tongue could be a Muslim but not a Mumin. Because confessing with the tongue that there is no god but Allah, but to keep the love for wealth, relatives and family in heart is not true faith. Whereas, Faqr is to turn away from everything and turns toward Allah whole heartedly. Moreover, it is reciting shahada by heart as well.

Meaning: Salat is the Miraj of a Mumin.

The word used in above mentioned hadith is Mumin not just a Muslim. Faqr is a path of becoming a mumin through spiritual Miraj.

Meaning: Certainly, the believers have attained their goal. Those who become most humble and submissive in their Prayers. (Al-Mu’minun: 1-2)

It means that we are saying goodbye to our inner baser self because to meet Allah and have His Divine Vision, the soul should be as pure as it was when Allah sent it into this materialistic world. Allah is the One and only, so He wants to be loved the way He is, the Perfect One. So Allah doesn’t stay in that heart which is already occupied by somebody else. When a Mumin offers his Salat he says goodbye to all the worldly desires and meets his ultimate Love. His heart and soul are completely present and he submits himself before Allah Almighty humbly. This spiritual state can only be gained after treading on the path of Faqr.

Fasting in the Month of Ramadhan

Similarly, the reality of fasting in Faqr is different for a believer and traveler of the path of Faqr. Fasting is not merely controlling hunger and lusts. The Holy Prophet says:

That is why, it is said that there are many people who apparently observe fast but actually they do not and there are many who are outwardly not in the state of fasting but inwardly they are i.e. they refrain themselves from the acts that are forbidden in sharia and also refrain physically and spiritually from all the diseases of inner baser self i.e. pride, arrogance, vanity, greed, malignance, prejudice, narcissism and conceit etc.

Only true seekers of Allah are the ones who sacrifice not only hunger and thirst for Divine closeness, but also all the desires of the inner baser self. They control the lusts of inner baser self not only during the month of Ramadhan, but also throughout their lives. Hence, they spent their whole life in the state of fasting.

Similarly, the esoteric meaning of Hajj is different which is revealed only after treading on the path of Faqr. The purpose of performing Hajj is not that the pilgrim returns home after seeing the Holy Ka’aba and visiting the holy sites. Instead, its real aim is to be blessed with the Divine presence and observation. Hajj is a journey exclusively performed for the sake of Allah. It is spending one’s time and wealth and reaching at those sacred places where there are present the signs of Allah. It is necessary to break all the idols of the innerself before going into the outward Ka’aba and perform the rituals. At the site of the Jamarat, besides stoning of outer devil it is necessary to kill inner lusts and devil inside.

In Faqr, spending money in the way of Allah for the sake of Allah results in the death of inner baser self and inward purity. It is a great virtue. The literal meaning of zakat is to purify. We should keep in mind the examples of sacred companions of the Holy Prophet while spending money. The heart of Abu Bakr Siddiq was free from the worldly desires so that he gave away his wealth, possessions and slaves in the way of Allah.

Meaning: And they also ask you about what they should spend. Say: ‘(Spend) whatever is surplus to your needs.’ Thus does Allah make His commandments clear to you so that you may meditate. (Al-Baqarah-219)

Faqr is a form of spiritual training. It is a pure sentiment and is not the legacy of any sect, group or lineage. It is Allah’s bounty and He gives it to whom He wills.

Meaning: This is Allah’s bounty which He gives to whom He wills. And Allah is the Lord of infinite bounty. (Al-Hadid-21)

In the present age of materialism, Sultan-ul-Ashiqeen Sultan Mohammad Najib-ur-Rehman, the present Shaikh of Sarwari Qadri Order is struggling hard day and night for spreading the beneficence of Faqr in every nook and corner of the world. He is using all available resources to spread the teachings and beneficence of Faqr. All his efforts to promote the teachings of Faqr show that he is on the footsteps of Prophet Mohammad. He advises all his disciples to follow sharia. Through his spiritual attention and persuasion, he is filling the hearts of the seekers with Divine light. This proves that he is the treasure of Faqr. May Allah give us the strength to walk through the path of Faqr with great courage and strength. Amen

فقر اساسِ اسلام is an Urdu article of the magazine “Mahnama Sultan-ul-Faqr Lahore” for the month of October, 2019. Originally penned by Arshia Khan Sarwari Qadri is presented in English by Faiza Gulzar Sarwari Qadri exclusively for the website. Do not forget to visit the original article to which you only have to click the link: https://www.mahnama-sultan-ul-faqr-lahore.com/october-2019-faqr-asas-e-islam/