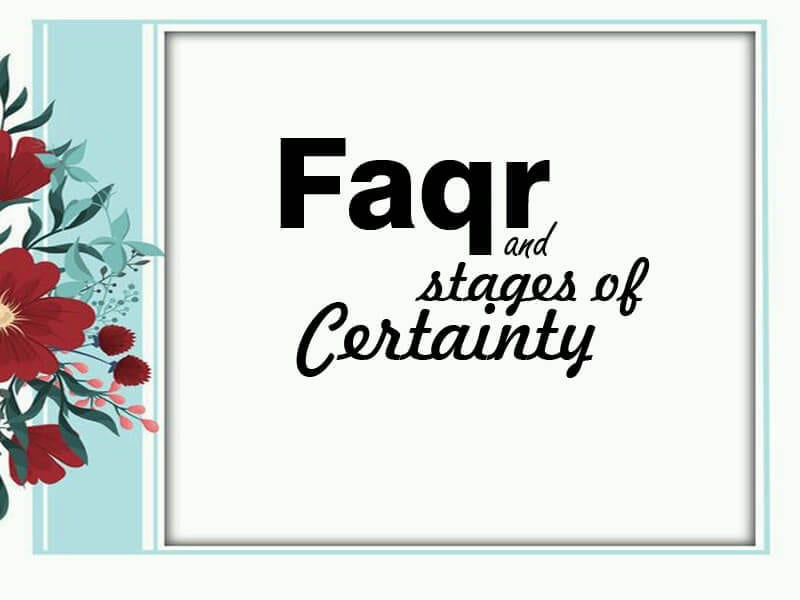 Faqr meaning in English is of indigence; usually taken for poverty, destitution and the like. And its meaning in Urdu is taken as that of Fakir. However, Mystics describe it as the main purpose of life. The Holy Prophet declared nothing but Faqr as his pride. He said:

Meaning: Faqr is my pride and it is from me.

Meaning: Faqr is my pride and it is from me. It is the reason of my superiority over all Prophets and Messengers.

Meaning: Faqr is one of the treasures of Allah.

Meaning: The Holy Prophet said, “Faqr is not appreciable for people in this world. But on doomsday it will be very precious for Allah Almighty”.

In fact, al–Faqr is the way or course that removes all the veils between Allah and His slave. Consequently, leading to Allah’s vision (deedar e Elahi) and union (visal). It is that spiritual level whereby seeker of Allah becomes indifferent to all desires and only seeks His closeness and vision. He always keeps in view Allah’s will and surrenders to it. His entire struggle is to build stronger relation with Allah. For that he ever keeps his inward pure of all spiritual diseases like malice, arrogance, hypocrisy etc. Furthermore, he always follows and submits to the perfect spiritual guide who is the leader of way of Faqr.

Meaning: His sight neither turned aside nor was overbold. (An-Najm 17)

When, the Prophet reached utmost boundary of creation, he beheld Face of Faqr and enjoyed the status of Sultan-ul-Faqr. He absorbed resplendent light of it and attained ultimate proximity and union with Allah. Then, he conversed directly with Allah. Afterwards, he advanced to ultimate stage of Faqr which is to annihilate in Allah. Hence, he became Faqr himself and acquired all virtues of love, gnosis, yearning for Beloved, intellect, tolerance, kindness and generosity. As said:

Meaning: Adopt all attributes of Allah.

When entire ocean of Oneness gathered in Prophet’s self on reaching final stage of Faqr, he said, “Faqr is my pride and Faqr is from me.” When he returned to his sacred Companions, the reality of Faqr manifested from him. So, a great number longed for it on hearing about ecstasies of gnosis from him. On this, Allah said to His beloved Prophet, “O Mohammad! Keep your attention towards these Fakirs because they are the ones who are always engrossed in invocation of Allah. (Mehak-ul-Faqr Kalan)

Sufis always preach to adopt the path of Faqr

Meaning: One who really loves the People of Cloak (Ahl al-Bayt) should be ready to wear the gown of Faqr. (Nahj al-Balagha)

Sultan ul Arifeen Hazrat Sakhi Sultan Bahoo entitles his teachings neither as Sufism nor any of its schools but ‘Faqr’. All his teachings are about path of Faqr and its related stages and philosophies. He says;

First is annihilation, negating existence of any other God ( لَآاِلٰہَ ). Second is becoming immortal with Allah ( اِلَّا اللّٰہُ ) and final level is to be the guide for people by becoming one with Prophet Mohammad ( مُحَمَّدُرَّسُوۡلُ اللّٰہِ ).(Ain-ul-Faqr)

Explanation: Sight of al–Faqr is a treasure and it has authority over all treasures. Faqr makes the man of sight independent of all desires. (Nur-ul-Huda Kalan)

Explanation: All the arms and throne and crest are  miracles of al–Faqr. Undoubtedly, Faqr is the Lord of Lords and the King of Kings.

Explanation: The status of al–Faqr is much higher than monarchy and kingdom. What can be said if someone wants to be a slave (of his own desires).

Explanation: Faqr is from Husayn ibn Ali which gives strength of jihad against false forces, whether exoteric or esoteric. Such Faqr makes one leader in the world. It is the heritage of true believers and the asset of Husayn ibn Ali.

Meaning: What do you understand by al–Faqr of a true believer! It is to subjugate and conquer all the dimensions. By Faqr a person acquires the attributes of Allah Almighty.

Moreover, comparing outward knowledge with AlFaqr, which is the knowledge of gnosis, Iqbal says:

Meaning: The objective of worldly knowledge is to elevate wisdom and intellect in person. While the objective of al–Faqr is to purify the soul and elevate insight and spiritual vision.

Meaning: Knowledge is the asset of scholars and jurists while al-Faqr is the asset of Prophets and possesses attributes of Christ who brought dead back to life and Moses who conversed with Allah. Knowledge searches the way but Faqr knows it.

Some people adopt this path untruthfully only to deceive people. Their intention is not to behold Allah but attain worldly respect or wealth. Some people also adopt being fed up of worldly troubles, failures and rejections. Or some Saint’s shrine caretakers also hypocritically claim to be the follower of this path. Mostly they are from Saint’s children and usually have no idea about it. Their aim is limited to the income of shrine or grabbing offerings from disciples. Or their ambition is to become known as Shaikhs and earn false nobility. Such Faqr is ‘compulsive Faqr’.

Contrarily, in chosen al–Faqr, seekers of Allah desire nothing but vision of Allah. They renounce and sacrifice everything for Allah saying ‘Allah is all for us’.

There are radical differences between compulsive and chosen Faqr. Compulsive results in death of soul whereas chosen vivifies the soul. In compulsive a person is disgraced in Allah’s court. But chosen bestows grandeur and strength.  Sultan ul Arifeen Sultan Bahoo says;

Meaning: (Compulsive) Faqr is disgraced in both the worlds.

The Soul of Islam

Contemporary religious scholars are being stranger to this way.  They have diverted people at large to superficial values and acts. Hence Muslims have forgotten their inward connection with Allah and entangled themselves into apparent rituals solely. Resultantly, Muslims of today are as stranger to the word Faqr and its reality as the non-Muslims are. Even though our Holy Prophet declared it as his pride and attributed it especially to his holy self.

If analyzed carefully, it is actual religion, as religion is to attain Allah’s closeness which is what this path exactly does. That is why Iqbal said:

Meaning: It does not matter if Europe resents the word ‘Islam’. Another name for the same religion is the honourable Faqr.

How to Achieve Faqr in Present Era?

In the present era, Sultan ul Ashiqeen is entitled as the 31st perfect spiritual guide of the Sarwari Qadri order, the spiritual confidant of Sultan Mohammad Asghar Ali and the spiritual descendent of Sultan Bahoo. Through his spiritual attention, teachings, literary work, websites and social media, he is tirelessly making efforts to spread the teachings of Faqr globally. He also established Tehreek Dawat-e-Faqr to fulfil his mission and also to make people aware of the soul of religion Islam. More so this organization continues the mission of his Murshid. Mainly, the goal of the organization is to guide the seekers of Allah towards Divine closeness and gnosis. In order to achieve that, Sultan Mohammad Najib-ur-Rehman made this teasure common. This also gives a perception of the true heritage of Prophet Mohammad. Moreover, he is granting Ism-e-Allah Zaat to Muslims in the world with or without oath of allegiance (al-bayah/ bayat).