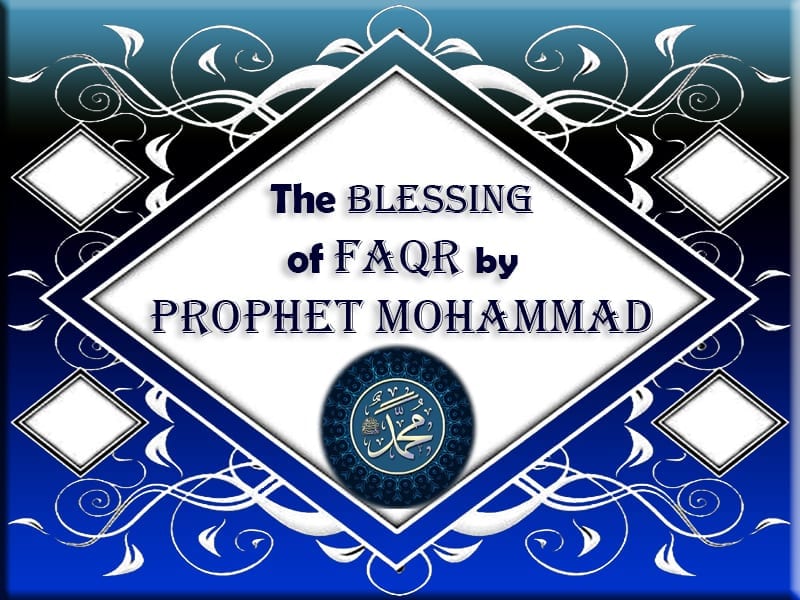 The Blessing of Faqr

Allah and His Beloved

Allah initiated the system of sending Prophets for the guidance of humanity. He blessed each Prophet with a special attribute from His own attributes. However, before sending His beloved Mohammad to this realm, Allah blessed him with all the Divine attributes and qualities. Allah has related His happiness and displeasure with the happiness and displeasure of His beloved Prophet Mohammad. By granting His beloved with perfect authority, He has named him ‘Al-Qasim’-the one who distributes Divine treasures. Since nothing is concealed from the beloved hence, Allah has blessed him with total authority upon the entire creation and  treasures so that he can grant anything to anyone according to his own will.

Prophet Mohammad is distinguished for his generosity and never returns anyone empty-handed, as he is the Mercy for all the worlds. Those who take guidance from him always remain on the straight path and follow sharia. Undoubtedly, this is the beneficence of the Holy Prophet. Of all the bounties and gifts of nature, the greatest and exalted is the treasure of Faqr. Faqr in Islam refers to its soul.

Miraj and Gift of Faqr

When Prophet Mohammad entered the Divine Court on the Night of Ascension, there were no limits of Divine love, union, proximity and vision.  He adorned the crown of Faqr and became the Light of Faqr himself. He loved his umma to the extent that despite his exalted status, he did not abandon his people. In fact, he brought Faqr as a gift from Allah for his umma. It is a great favour of Prophet upon the seekers of Allah for which one cannot thank enough.

Through the benevolence of the Holy Prophet, Faqr is the journey on the path of Truth whose destination is the Divine Essence Himself. It was gifted by the Prophet and is the only way of vision and proximity to Allah. If the Prophet accepts a person in his court, he reaches the ultimate destination of Faqr. Allah has prioritized Prophet Mohammad above other Prophets and Messengers due to Faqr. The Holy Prophet says:

Meaning: Faqr is my pride and due to Faqr I am above all Prophets and lovers.

Far meaning in Urdu is taken as poverty but it is actually the path to Allah. After Miraj, the Prophet, enriched those Companions with Faqr who strongly desired and sacrificed for the closeness and union with Allah.  Those Companions who only desired the Divine Essence and who presented their lives, wealth and every possession before the beloved, then the Prophet by virtue of being al-Qasim, conferred the best treasure i.e. Faqr upon them. According to a Hadith:

Meaning: Faqr is a unique treasure from the Divine Treasures.

System of Faqr After Prophet

This is because they were trained by the Prophet himself and were the closest to him after the People of Cloak.

After the Companions, in every era, different Fakirs manifested who spiritually connected the seekers of Allah to Prophet Mohammad making them capable to receive  the bounty and riches of his court. This is the biggest evidence of the fact that the benevolence of Prophet would continue till the Day of Judgement. Any follower of Prophet Mohammad who sincerely desires and makes effort to follow the true path, would be rewarded with it.

What is the identity of the spiritual heirs of the Holy Prophet and Fakirs?

Their recognition is that they excel to the station of annihilation in Allah and immortality with Him. Hence they become the perfect Fakir and the Universal Divine Man of their era as the heir of the Holy Prophet. Then they spread the message of the true path and give invocation and contemplation of Ism-e-Allah Zaat and Ism-e-Mohammad to the seekers of Allah, taking them to the Mohammadan Assembly.

Meaning: First find a companion, then set out for the journey.

Prophet Mohammad has preserved the treasure of Faqr in the  inward of the Universal Divine Man. If this isn’t a favour upon us Muslims then what is it? Thousand years of worship, excessive recitals and exercises are useless without the perfect spiritual guide. As, we can never reach the Divine court on our ownself because we are attacked by nafs and Satan from which only the Universal Divine Man can save us.

The journey from outward to inward is possible through the physical guide to the spiritual guide i.e the Holy Prophet. The metaphorical love takes one to the Divine love.

In this era, the methodology of the perfect spiritual guide is that he grants the invocation and contemplation of Ism-e-Allah Zaat to everyone who comes to his door in search of gnosis and Faqr. With progress in Faqr, the disciple is granted Ism-e-Mohammad.

When a seeker sincerely contemplates Ism-e-Allah Zaat and Ism-e-Mohammad under the guidance of the perfect spiritual guide, he gains presence in  the Mohammadan Assembly. Here he spiritually meets the Prophet and his Companions. However, a seeker only elevates to the level of belovedness when he stays in this Assembly with patience and perseverance, respect and modesty as well as with complete submission and obedience cutting  himself away from worldly matters. Thereafter, he also gains the gnosis and union with Allah. About this Assembly,

“Whoever brings a request in the Mohammadan Assembly with sincerity and certainty, then the Prophet, his Companions and the sacred Imams come to himto help him and let him see them with physical eyes.” (Aqal-e-Baydar)

From the above narration, it becomes crystal clear that Faqr is solely the reward from Prophet Mohammad. In fact, this way is entirely a spiritual journey but such people also exist who pretend to wear the robe of Faqr in greed of fame and fortune to rob the faith of innocent people. Beware! He who claims Faqr without the mediation of a spiritual guide is fake and it is called the constrained Faqr. Its follower begs everywhere but remains deprived of the gift of Truth. It is the disgraceful Faqr which falls flat.

Meaning: I seek Allah’s refuge from the Faqr which makes one fall on the face.

In contrast, the Faqr of Prophet in which he took pride is the chosen Faqr.

Transference of Faqr in Current Era

Perfect Spiritual Guide of This Era

In the current era, the Perfect Saint exists who is exactly on the footsteps of Prophet Mohammad. Being proficient in Faqr, he is distributing the beneficence of Mohammadan Faqr among the seekers of Allah. He is none other than Sultan-ul-Ashiqeen Sultan Mohammad Najib-ur-Rehman. On the first day of oath of allegiance, he grants his disciples the contemplation of Ism-e-Allah Zaat and the king of invocations ‘Hoo’ as well as mashq-murqoom-e-wajudia which is the exercise of inscribing Allah’s name on one’s body with index finger. He is the 31st  perfect Shaikh of Sarwari Qadri order and the way he has and is spreading Faqr among the seekers of Allah is incomparable and unprecedented.

There is no limit to the beneficence of Prophet Mohammad. If one ponders, he never remained away from his umma. He always provided the means for the guidance to the seekers of Allah. People of Cloak and Sacred Companions as well as Perfect Fakirs are indeed the medium of alfaqr and favour of the Prophet. We cannot thank enough for these favours of the Prophet.

Sultan-ul-Ashiqeen on the Footsteps of Prophet

As a disciple, I have found Sultan-ul-Ashiqeen on the exact footsteps of the Holy Prophet. I would not refrain from saying that my spiritual guide has spread alfaqr to an unparalleled extent till eternity. For this purpose he has written number of books, created websites, accounts, pages on social media forums as well as web TV channels which are spreading alfaqr worldwide.

You are invited to acquire the company of the Universal Divine Man of the era so to achieve the Prophet’s treasure of Faqr to succeed in both worlds. The Prophet has given the treasure and provided the medium. Now it is upto us that what, when and how much we take it because it depends on what one strives for, wishes, desires and loves. The Hadith says:

Meaning: The best desire is the desire for Allah and the best invocation is the invocation of Allah.

Sultan Bahoo calls the seeker of Allah a male. The reward of a seeker is the Divine Essence itself. Anyone who longs for the vision and closeness of Allah with sincerity, finds the path to the Mohammadan Faqr because it is the path of the vision, closeness and gnosis of Allah.

As Iqbal says in Faqr-e-Iqbal:

Explanation: No one knows that the Faqr in which ‘the soul of Quran’ is unveiled, possesses the most elevated stations.

This article was originally published in the November issue of Mahnama Sultan-ul-Faqr Lahore (the monthly Urdu magazine of Tehreek Dawat-e-Faqr). The article was titled as ‘Harat Mohammad Ka Taliban-e-Maula Ko Atta-e-Faqr’. It was originally written by Mrs Sahar Hamid Sarwari Qadri and has now been translated
into English by Neyn Tara Sarwari Qadri. If you wish to read the original article, please visit:
https://www.mahnama-sultan-ul-faqr-lahore.com/november-2019-hazrat-mohammad-ka-taliban-e-maula-ko-atta-e-faqr/
Please leave us a comment and hit the like button.