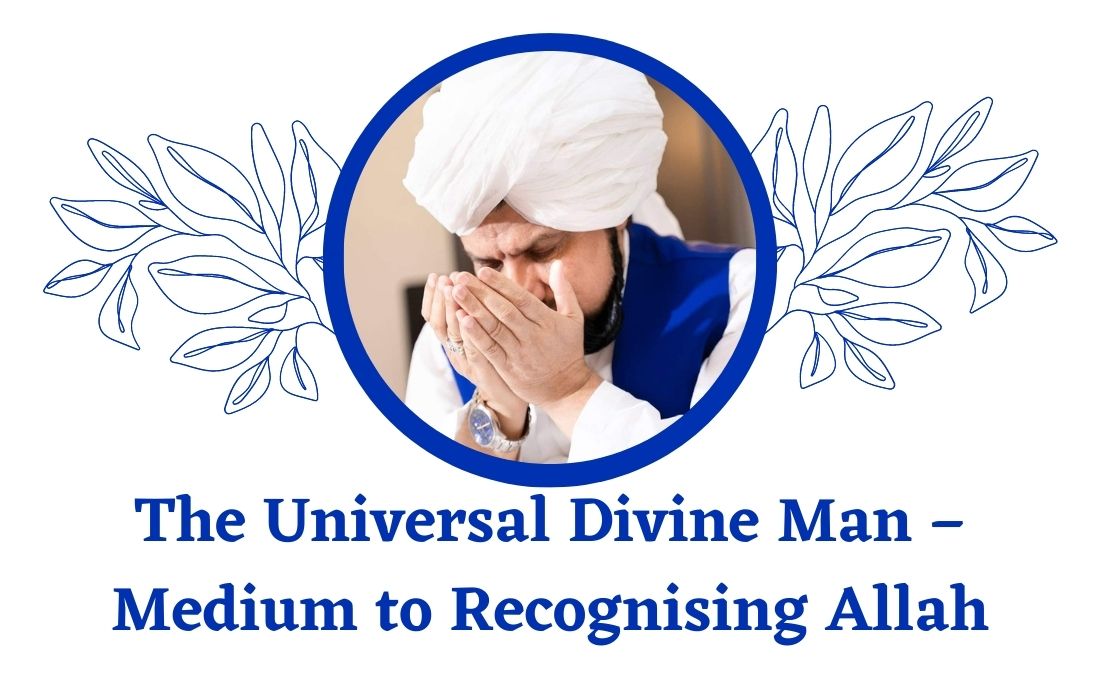 Success in life is only possible through the benevolence of the Universal Divine Man. He cleanses people’s inwards from all kinds of evil attributes and fills them with Divine light. There is always a Universal Divine Man present in every era. He is the spiritual vicegerent of the Holy Prophet (pbuh) in that era, bearer of the Trust of Faqr and the manifestation of Mohammadan reality.  Sayyid Abdul Karim bin Ibrahim al-Jili states in his literary work al-Insan al-Kamil:

“The Universal Divine Man is the celestial pole around whom the whole universe of existence revolves from pre-existence till eternal end. Ever since the beginning of existence till eternity, he is unique entity that appears in different physical dresses in different ages, each with a new name that would not go for another of his dress. His actual name is Mohammad, filial appellation is Abu al-Qasim, his epithet is Abdullah and his title is Shamsuddin. According to each physical dress, he has different names. In every era, he has a name according to that particular age.”

Everything in the universe is a manifestation of Divine names and Divine Essence. However, the sacred being of the Holy Prophet (pbuh) is that entity through which all the Divine attributes and names manifest in their complete and best form. Allah says: “I created man with My two Hands.” Two hands here means Allah’s attributes of compassion and wrath.

Righteousness means to cleanse one’s inward of all evil attributes and enlighten it with the light of Divine names and Divine attributes. Only that person is eligible to travel the mystic path successfully be the preacher of righteousness (Murshid) whose own inward is completely engrossed in Divine light. As a Qudsi Hadith goes:

“The inward of believer is the Throne of Allah.”

“Neither the earth nor the heavens can contain Me, however the inward of My believer can.”

The Universal Divine Man is the only medium that can truly acquaint a seeker with Divine attributes. As one Hadith says:

The Universal Divine Man is the medium that connects the creation with their Creator (Allah). For this reason, the Universal Divine Man is referred to as ‘Barzakh’ which means medium or connection. Something that is in between two things is called ‘Barzakh’. And for that reason, the time between death and the day of Judgement is called ‘Barzakh’. Allah says in Quran:

Meaning: O believers! Fear Allah persistently and keep looking for means to (approach and get closer to) Him (al-Mā’idah: 35)

Here, the medium means the Universal Divine Man. The being of Universal Divine Man is manifestation of wonders and rarities. Because it is not easy to understand his physical being and existence. It is only ardent Divine love that unfolds the hidden secrets.

Lordship and Slave-hood is abridged in Universal Divine Man

Sultan ul Ashiqeen says in Sufism – The Soul of Islam

The below verse from Holy Quran explains how both these attributes merge in the Universal Divine Man. Allah says in Surah al-Rehman:

Meaning: He is the One Who has made the two seas flow that join each other; There is a barrier between them; they cannot breach (their respective) limits. (ar-Rahmān: 19-20)

Imam Husayn (ra) beautifully explains the status of Universal Divine Man as below:

“Barzakh means something that sits in between two things such that itƒ has equal weightage on both sides. If someone was to look at it from one angle, he would think that it is facing him. Whereas on the other hand the other person from opposite side would get the same impression.” (Mirat ul Arifeen, translated by Mrs Ambreen Moghees Sarwari Qadri)

Explanation: “Abduhoo, is beyond your comprehension because from one aspect he is man like any other whereas on the other hand he is the manifestation of Divine Essence.”

Meaning: And you see these (people) as if they were looking at you, whereas they do not see (anything). (al-A‘rāf: 198)

Sayyid Abdul Karim bin Ibrahim al-Jili has stated three states of the Universal Divine Man in his book al-Insan al-Kamil. Here is a summary of those:

The Universal Divine Man is guidance. As he is completely acquainted with Divine attributes and names. Secondly, he is annihilated in Divine Essence which reveals all the hidden secrets upon him. Thirdly, he can do things that a common person cannot do i.e. manifest miracles.

Every Surah and verse of Quran contains a treasure of hidden secrets within it. People infer and benefit from this hidden knowledge according to their intellect and inward piety. In Surah al-Fatiha which is known as the summary of whole Quran, Allah has mentioned about Divine Essence and attributes in detail as well as the purpose of creation of man. The first three verses are about Divine attributes and Essence. Whereas the last three are about the man. The verse in between these two is called ‘Barzakh’ which in fact refers to the Divine Universal Man. Because he is the medium that connects the man with Allah. He blesses a seeker of Allah with the true meaning of devotion and trust upon Allah.

From that point of view,‘بسم اللہ الرحمن الرحیم ’ (Bismillah ar-Rahman ar-Rahim) is the mother of all. In order to explain its meaning to the masses, Imam Husayn (ra) divided it in three parts in his book Mirat ul Arifeen. These three parts also explain the three classes of creation.

The first part ‘بسم‘ is for Allah’s names. The second part ‘الرحمن الرحیم’ (ar-Rahman ar-Rahim) explains attributes of Allah. Whereas the middle part ‘اللہ’ is the station of ‘Barzakh’ i.e. it belongs to both the Divine Essence as well as Divine attributes. This is commonly referred to as the station of Universal Divine Man. The name Allah can be attributed to a Universal Divine Man because he is completely annihilated in Divine Essence and blessed will all His attributes.

“(Allah says to the Universal Divine Man) You are My beloved and purpose of My creation. You are My manifestation amongst the creation. My secret and My noor (light). You are manifestation of My beauty and marvels. You are My Essence, My name, My praise and My attributes. I am in your name and being.” (Al-Insan al-Kamil, Nafees Academy)

Allah has described three groups of people in ‘بسم اللہ الرحمن الرحیم’ (Bismillah ar-Rahman ar-Rahim). First part is about those who only know Allah by His name. The last part is about people who recognise Allah through his attributes and see His attributes in everything around them. The middle part ‘اللہ’ actually means the Universal Divine Man. It is those people who recognise the Divine Essence and the name Allah applies to them.

The Universal Divine Man has the title of ‘Rabb ul Arbab’ from Divine Court. In fact, his inward and outward self are the same. Therefore, Divine Essence completely manifests through his being along with all the Divine attributes. However, his inward is the station of Lordship whereas his outward being depicts his slave-hood. Since the Universal Divine Man is perfect blend of Lordship and slave-hood, that is why he is the medium between the Lord and His slaves.

‘Allah’ is the personal name of Allah. However, among all attributive names of Allah, the name al-Rehman is dominant over others due to its vastness. Its theophanies encompass the entire universe. Through the theophanies of this name, Allah blesses His creation with bounties. This name of Allah is the source of providing blessings to everything in the universe. The Universal Divine Man, the Holy Prophet (pbuh) is the medium of transferring the blessings and bounties of Allah to His creation. The Universal Divine Man is the medium through which the attributes of various names of Allah manifest in the creation. And the rest of the creation adopt these attributes through the Universal Divine Man. If this medium was not there, it would not be possible for the creation to withstand the effects of Divine theophanies.

Husayn ibn Ali (ra) in his book Mirat ul Arifeen explained the facts about Divine attributes, by creating three groups. In the first group, he put Divine names and attributes, in the bottom group is mankind. The one in between these two is Universal Divine Man through whom Divine theophanies reach the people. On this basis, one of the names of the Holy Prophet (pbuh) is ‘Abu al-Qasim’ which means the one who distributes.

Difference between Scholars and Perfect Fakirs

According to Sultan Bahoo (ra) there is difference of understanding of ‘Barzakh’ between the scholars and Perfect Fakirs. The Perfect Fakirs have the blessing of permanent presence in the Mohammadan assembly. Their every act is as per the will of Allah. The scholars answer on the basis of their outward knowledge. Whereas, the Fakirs have the blessing of perfect contemplation whereby they behold and converse with Divine Essence in their inward.

“So, the scholars answer on the basis of their outward knowledge. Whereas a Perfect Fakir answers from the station of Divine contemplation i.e. direct from the Holy Prophet (pbuh) on the basis of what he sees and comes to know at that station. So, a Perfect Fakir is completely indifferent and doesn’t need to trawl through books. He has cloak of noor (light) around him and is always present in Mohammadan Assembly inwardly. (Aqal e Baydar)

The Universal Divine Man of this era is Sultan ul Ashiqeen Sultan Mohammad Najib ur Rehman. Everyone is invited to pledge oath of allegiance on his sacred hands and begin their journey towards attaining recognition of Allah Almighty.

May Allah grant us all the ability and perseverance to remain connected to the Perfect Fakir of this era Sultan ul Ashiqeen Sultan Mohammad Najib ur Rehman. Ameen

23 thoughts on “The Universal Divine Man – Medium to Recognising Allah”