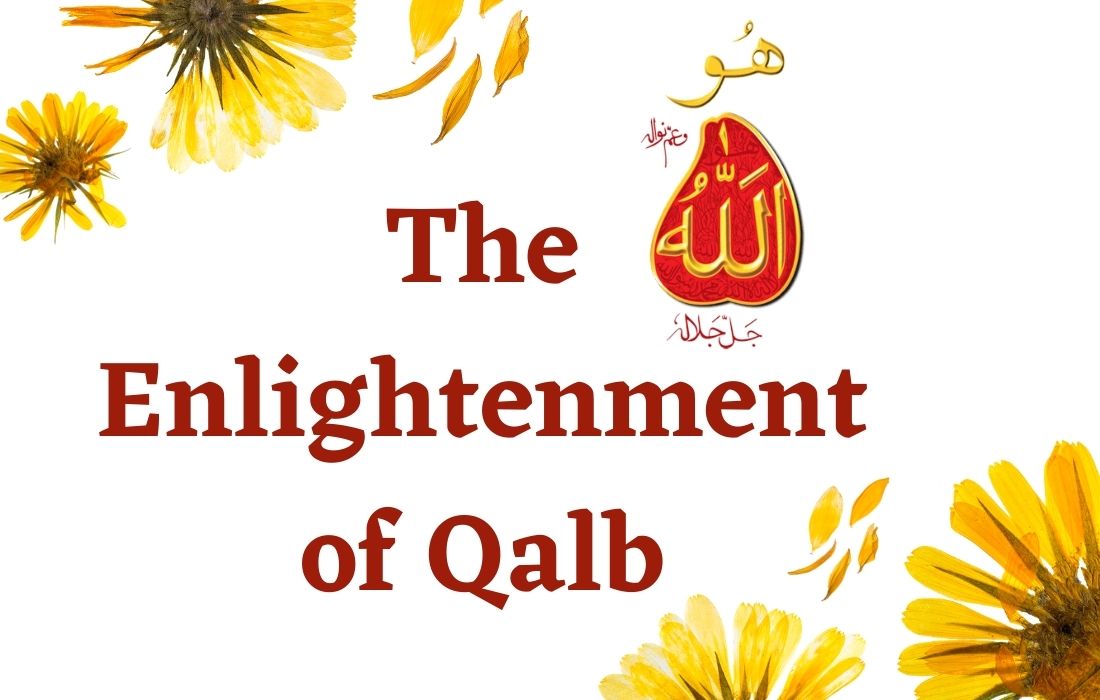 The Enlightenment of Qalb

Prophet Mohammad (pbuh) said: “Indeed, there is a piece of flesh in human body. When it is rightly guided the entire body is guided. If it deteriorates, the whole body deteriorates. Remember! That is Qalb (heart). ”

In human body, Qalb is a muscular organ that supplies blood throughout the body. It is a non-stop movement that continues from birth to death. The movement of Qalb is central to human existence. It is the guarantor of survival by providing blood to the whole body. Therefore, the Qalb acts as king and the whole body acts as its subject. The heartbeat is symbol of human life. Stopping of which is death.

According to Sufis, Qalb refers to the inner and spiritual existence of man, which Allah Almighty has declared as His Throne. It is the centre of good and evil. It is the best part of existence and equally the worst part, for it being a tool of Satan. The heart is the place from which all the feelings, emotions and moods of a person originate that affect the whole personality. If we do not get the desired result of our efforts, our heart becomes sad. On the other hand, it becomes happy when we achieve what we desire.

No act of worship or good deed is acceptable in Islam unless one performs it wholeheartedly. Within the Qalb, the believer receives light and guidance, he remembers his Creator from Qalb through remembrance so that his soul may develop.

When the Qalb becomes pure, all the organs also become pure. And when it is corrected, all the organs are corrected. When it is given vestment (of noor), then the body is also given vestment. When this piece of meat becomes virtuous, the whole body also becomes virtuous. The Qalb and righteousness of Qalb leads to the righteousness of the soul which is between man and his Lord. (Al-Fatah Al-Rabbani – Majlis 41)

If your Qalb becomes civilised then surely your organs would be civilised too because Qalb is the king of organs. So when the king becomes polite, so does the public. (Al-Fatah Al-Rabbani – Majlis 29)

Here, too, the Qalb refers to the soul or innerself.

“If the Qalb (inward) sustains the nature on which Allah Almighty created it, then for it all matters are transformed according to its will. In fact Allah created the inward on the nature of His Own attributes.”

He further states that:

The Qalb (inward) of man is the Throne of Allah where the Almighty manifests Himself as Rahman. He is the centre of Divine mysteries and encompasses all the groups of every being and creature. The inward of everything is its essence. The human inward is also the light of God Almighty, the radiance of which is the essence of all creatures and beings. It has the feature of accepting the change quickly because it is the point where all the Divine names and attributes are focused. When it is attracted to any particular Divine noun or attribute, it becomes a reflection of its command. (Sirr e Dilbaran)

But man, lost in the lures of worldly attractions, replaces the light of his Qalb with darkness. When the Qalb is engrossed in darkness of ignorance, how can the theophanies of light of Allah manifest in it? By distancing ourselves from Allah, we have become subservient to mere carnal desires and pleasures. The beating of heart, which is the guarantor of survival of human being, is considered human life.

Beating of Heart is Different from real ‘life’ of Qalb

But Allah, the Exalted, did not call it life and death, because the Qalb (heart) made of flesh is related to the physical body, while in reality Qalb is related to soul. If this Qalb is alive, then the physical being remains alive even after death, but if this same Qalb is dead, then the physical being is apparently alive but in fact it is dead. The question arises, what does it mean to be “alive”? If a person’s Qalb becomes spiritually alive, it emerges from the darkness and enlightens with Divine light. As Allah says in Quran:

Meaning: Can he who was dead (i.e. devoid of faith), then We gave him life (by guidance) and created for him the light (of faith and gnosis), and (now) by means of that, he walks amongst (the rest of) the people (also to spread that light) be like the one who is steeped in the darkness of (ignorance and error in such a way) that he can by no means come out of it? Likewise, the actions disbelievers keep doing are made alluring and attractive (in their sight).‏ Al-An‘ām [6 : 122]

Explanation: Strive to enlighten your inward so that you move away from hollow outward deeds that are a mere pretence. Without an enlightened inward (Qalb), devotions and deeds are worthless like the decorations on the grave of a dead. (Sultan ul Waham)

Real life is the life of Qalb. The enlightening of Qalb means closeness to God. The Qalb that is engrossed in remembrance of Allah is blessed with a higher spiritual rank and the one that is oblivious to that is dead. According to Iqbal:

Explanation: If a person’s Qalb dies, it means that he has turned away from Allah Almighty. But if the Qalb is alive, then Allah, the Exalted, is close to it and this is called gnosis of Divine Essence.

But the question is, how does the Qalb come to life? It enlivens when it is connected to the one (Perfect Spiritual Guide) who revives the heart. Sultan Bahoo in his book “Noor-ul-Huda Kalan” says:

Explanation: Do you know how to gain enlightenment of Qalb? It is when you become desired in the court of Allah and understand Oneness of Being. (Noor ul Huda kalan)

Enlightenment of Qalb Requires Company of a Perfect Spiritual Guide

Only a perfect spiritual guide can enliven the Qalb with his Divine company and spiritual sight. A perfect Spiritual Guide is like a doctor who treats the diseases of the innerself in light of Quran and following the sunna of Holy Prophet (pbuh). A saying goes as:

Meaning: Who irrigates a barren lands, so he becomes the owner of it.

“Excellence of Abu Bakr (ra) is not because of excessive devotions. Instead, it is due to something (special) in his Qalb (love of Allah and love Prophet Mohammad (pbuh)).” (Sultan ul Waham)

The Perfect Spiritual Guide removes the diseases of innerself and purifies it from evil attributes. He bestows his disciples with contemplation & invocation of Ism e Allah Zaat. Without contemplation & invocation of Ism e Allah Zaat, the innerself never dies and the soul does not become live until the innerself dies. The Perfect Spiritual Guide of Sarwari Qadri Order grants Sultan Al-Azkar (King of Invocation) to his disciples on the first day of bayat (oath of allegiance). Sultan-ul-Azkar is the secret invocation that gives life to soul.

“O Dear! All prophets, messengers, martyrs and saints gained spiritual excellence through hidden invocation (invocation that is performed with breaths). This is a blessing that Perfect Spiritual Guide bestows upon sincere seekers of Allah. The invocation of the tongue is just habitual that doesn’t benefit one (in attaining the gnosis of Divine Essence).” (Sultan ul Waham)

The real invocation is the invocation of the Qalb which gives life to soul. The remembrance of Allah Almighty is the source of peace of inward.

Meaning: Know that it is the remembrance of Allah alone that brings calm to the hearts. (ar-Ra‘d, 13 : 28)

Meaning: And remember your Lord in your heart with humility and tearful submissiveness and fear and repentance and also by calling in low tones. (Persevere with His remembrance) morning and evening and be not of the neglectful. (al-A‘rāf, 7 : 205)

The aforementioned verse also commands to do invocation of Qalb. When the Qalb becomes free from all kinds of desires and connects with Allah, it becomes alive. Connecting with Allah, the Lord of Glory, gives the Qalb life that is beneficial to man in this world and the hereafter, and a guarantee of success.

The story of an Arif:

A perfect Arif (Saint) was sitting in a mosque. He saw a man wandering around looking for a place. He asked the man: O servant of Allah! What are you looking for? He replied: I am looking for a place where I can pray alone and no one can bother me. On this, the Saint said: “Empty your heart from everything except Allah then pray wherever you wish.”

The life that the heart attains by connecting with God is guarantee for success in this world and the hereafter. Regarding the different states of Qalb, Dr Tahir-ul-Qadri has described three types:

In this category are those whose hearts are always revolving around the world and the desires and lusts of the world. Whose desires are unlimited.

These are the people whose hearts keep flying towards Sidra Al-Muntaha and above the Throne.

Hearts drawn to Allah are also described in a few ways, which are as follows:

These spiritual hearts are always waiting for God’s gift. It is a state of good, spiritual and high level of hearts. It bears a resemblance to the heart of Adam.

Such is the heart of those who are waiting to meet Allah Almighty. Allah, the Lord of Glory, also longs for such a heart.

This kind of heart longs all the time for Divine vision. Such a heart is like the heart of Prophet Muhammad (pbuh).

Regarding the heart like that of Prophet Muhammad (pbuh), Shaykh Abu al-Hasan al-Shazli says:

This is the position of those lucky people who are connected with Allah in such a way that the passion of meeting, seeing Allah has made them not ask for anything. Woe to those who ask frequently but are still deprived. (Qalbi Hayat o Mamat)

When the heart is connected with God and it is endowed with perseverance, then it does not move from its place no matter how many storms come. Such a heart always remembers Allah and at this point the desire to ask also disappears.

A Qudsi says: “Whom the preoccupation of my dhikr prevented from asking, I bless him more than those who ask.”

The following are the signs of living or dead Qalb:

1. Detachment from the world:

The sign of a living heart is that even while living in the world, it is free from the world and its desires. My spiritual guide Sultan-ul-Ashiqeen Sultan Muhammad Najib-ur-Rehman says about detachment from the world:

Those whose hearts are filled with love of Allah and His remembrance, the love of the world cannot enter their hearts.

2. The desire for remembrance of God:

Loving the remembrance of Allah is also a sign of revival of the heart. A Hadith goes as below:

The example of one who remembers his Lord and the one who doesn’t is like that of living and the dead. (Sahih Bukhari)

3. Love and companionship of the righteous:

The company of saints and righteous people also gives life to Qalb. These are the people on whom Allah has bestowed His special reward. These pure people are the source of light and blessings that are present in every age for the guidance and goodness of mankind. The company of the righteous is life for the hearts.

Sultan-ul-Aashiqeen Sultan Mohammad Najeeb-ur-Rehman is the present Shaikh-e-Kamil of the Sarwari Qadri order who revives dead hearts with his perfect spiritual sight and is like the sun in the darkness. In today’s modern age, he guides mankind on the straight path. He enriches the soul with the piety. It is a common invitation to everyone to join Tehreek Dawat e Faqr so that their hearts may be filled with Divine love.

19 thoughts on “The Enlightenment of Qalb”