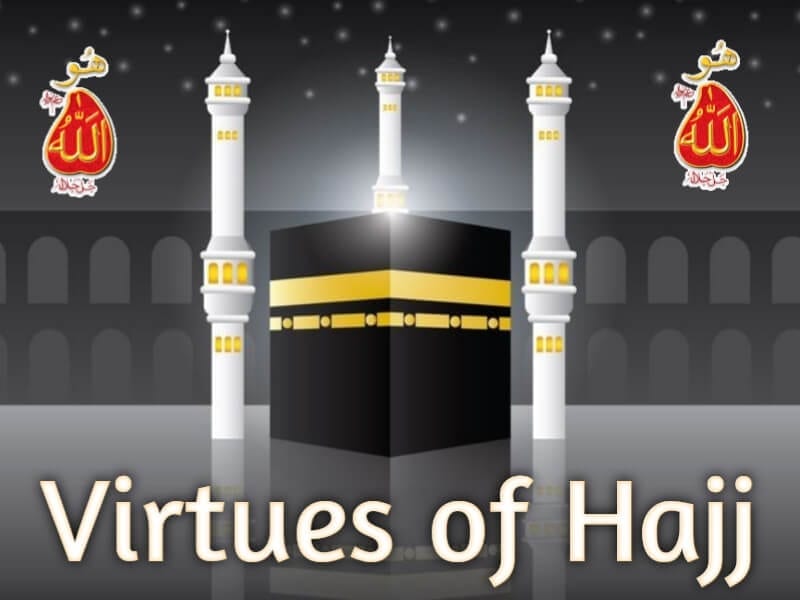 Hajj is the fifth pillar of Islam. All religious obligations are important but in the Mohammadan Sharia, Hajj is magnificent and superior. This is because it is the sign of oneness and universality among Muslim umma. Also it is the reason of unity and  equality among them. Salat , recitation of Holy Quran, hunger and thirst like fasting, abstaining from the desires of innerself, sacrifice of money by giving alms, tolerance, patience, forgiveness hence Hajj includes all these worships.

Literal meaning of Hajj is “to visit” or “to intend to do something”. According to sharia, it denotes a particular form of worship which is performed in the holy city of Makkah at the sacred places of Mina, plain of Arafat, Muzdalifah and holy Kaaba from 6th to 13th of Zilhaj.

Hajj became obligatory in 9th Hijri and is incumbent at least once in a life time upon every Muslim adult who is physically, financially and circumstantially capable of undertaking the sacred journey to holy Kaaba. One who denies Hajj is expunged from Islam. One who delays in performing Hajj or renounces it without a legitimate excuse is a sinner, reprobate and impious, it is commanded not to accept his testimony.

Allah says in the Quran:

Meaning: And the Pilgrimage to this House is prescribed for the people for the sake of Allah whoever may afford its journey; and whoever denies (it), then indeed Allah is Self-Sufficient, Beyond Need of all the worlds. (3:94)

Meaning: And proclaim the Hajj (Pilgrimage) aloud amongst the people. They will approach you on foot and (mounted) on all lean camels, coming by distant tracks (22-27)

Once someone asked  Prophet  Mohammad  about  Taqwa,  he  pointed  his  finger  towards  his  chest  and  said “Taqwa is here”. To remain firm on the orders of Allah is true form of taqwa. But in the mystic terminology getting closer to Allah by abstaining from the creation is called taqwa.The more a person gets closer to Allah the more he becomes pious. Allah has mentioned Taqwa so many times in the Holy Quran that it seems as if all sayings in the Holy Quran are just to make people pious.

Meaning: And Allah loves those who commit themselves to purity. (9-108)

Sultan Bahoo says in His book Sultan ul Waham that

While doing any act the state of mind which is for Allah is called taqwa. One can be hypocrite before the creation but the inward cannot be hypocrite before Allah. That’s why the above Hadith says that every person will get the reward according to what he has intended.

Hajj is the bond between man and Allah

Apparently, Hajj is  a transitory prayer but actually it is the image of a person’s whole life. It is a bond of  providence of Allah and slavery of man. Hajj is the interpretation of a believer’s life as well as his death.

Hajj means visiting Allah. It is  the intense form of being close to Allah. If other forms of worship are the remembrance of Allah then Hajj is the form of reaching to the court of Allah. A person feels like he is standing before Allah while standing in front of Kaaba. The circumambulation around the Kaaba reflects the truth that man is circulating around Allah like a moth.

Importance of Hajj according to Hadiths:

The Holy Prophet says about importance of Hajj:

Hajj of The Holy Prophet

Meaning: Madina is the house of that splendid one who is the Kaaba of Kaaba.

In 10 hijri Holy Prophet decided to perform Hajj. It was informed everywhere that the Holy Prophet was going to perform Hajj. He offered the afternoon prayer inside Madina and gave the sermon. Before the sermon, he  elaborated the components of Hajj. After that he oiled and combed his hair, covered himself with a shawl and set on his journey. When he reached Dhul Hulaifah he offered shorten salat. He spent the night there. In the morning he had ablution with a special fragrant water. Hazrat Ayesha Ra brought a scent of musk. The Holy Prophet wore the perfume. After the ablution he wore a leg sheet and mounted on a camel and recited these words for the first time.

Meaning: O Lord You  are the Owner of the existence. Existence is from You and shall return to You. O my Holy Lord keep us alive with peace and let us enter the paradise peacefully. O my Holy Lord You are very graceful. And very exalted. O Dignified and Noble, O my Lord! Let the magnificence, honor and awe of Your house (Kaaba) be increased and let the respect and glory of Kaaba be increased.

When he entered inside the mosque, he went straight to the Holy Kaaba. When he stood in front of the holy black stone (Hajr-e-Aswad), he paid compliments but did not raise his hands.

After circumambulation he went to the station of Ibrahim while reciting:

Meaning: And (remember) when We made this House (the Kaaba) a central place for mankind to turn to (and assemble) and a sanctuary for peace

What are those esoteric demands?

The man responded negative to all these questions.  Hazrat Junaid  Baghdadi  said  to  him,  “You  failed  to  fulfill  the  terms  and conditions  of  Hajj.  Go  back  and  perform  Hajj  once  again  giving due  attention  to  all  the  essentials,  so  that  your  Hajj  may  bear some resemblance  with Prophet  Abraham’s Hajj.”

Thus, one should perform the Hajj of the inward Kaaba. Hazrat Umar asked, “O Prophet of Allah! How should one perform the Hajj of the inward Kaaba?” The Holy Prophet replied, “The very existence of man is like an intramural. If the veils of doubt, illusion and everything other than Allah are removed from the inward, then the theophany of Divine Essence is observed in the courtyard of inward.” This is the actual purpose of performing the Hajj of Kaaba. Moreover, the aim of performing this veritable Hajj (i.e. Hajj of inward Kaaba) is that the man removes his ‘self’ from his very existence in such a way that nothing remains in his existence, his esoteric and exoteric being are purified homogeneously and his inward attains the Divine attributes.” Hazrat Umar asked, “Hazoor! How could one annihilate one’s own existence?”

“Why is the inward considered as the House and Throne of Allah?” The Holy Prophet replied, “Allah says in the Quran:

O Umar! The residing place is called a house and since Allah resides in the inward, therefore the inward is considered the house and Throne of Allah.”

Hazrat Umar then asked, “O Prophet of Allah! Who is the speaker, the listener and the viewer in this earthly body?” The Holy prophet said, “He (Allah) is the Speaker, He is the Listener and He is the Viewer.” Hazrat Umar inquired, “Then who performs the Hajj of the inward Kaaba?” The Holy Prophet responded, “The Divine Essence Himself! When man removes the veil of inciting innerself and there remains no veil between the worshipper and the Worshiped (man and his Lord) then his inward acquires the Divine attributes and the Divine Essence manifests in his inward. The manifestation of Divine Essence in the inward of man is the Hajj of inward Kaaba, the real Hajj.”

Hazrat Umar questioned, “When everything is the manifestation of the Divine Essence then who is being guided and why?” The Holy Prophet answered, “He Himself is the Guide and the Guided.” Hazrat Umar asked again, “Then what is this diversity around?”

“Guidance is like trading. A trader will only sell what a buyer demands. A buyer of wheat shall not be given groats and a buyer of groats shall not be given wheat. O Umar! Prophets are like physicians. Just as a physician gives medicine to the patient according to his nature and the disease he is suffering from and the patient cures with that congenial medicine, similarly, Prophets grant the medicine of gnosis to the true faithfuls according to their spiritual capability and inward disease through which the patient achieves perfect spiritual cure and becomes Mystic.

Thus to get the pleasure and blessings of exoteric and esoteric Hajj, one should be inwardly pure. Allah opens the ways of actual Hajj and blesses us with the station of true form of Hajj. Thus man achieves the stations of annihilation and immortality with Allah by passing the stations of Divine closeness and union. Then comes the status where man leaves all the desires and pleasures of the world and  gets closer to Allah and the Holy Prophet. That is actual form of Hajj. And one who gets that fortunate is the true believer. (Asrar-e-Haqeeqi)

Meaning:  The pilgrims go to Makkah and do work really hard.  Without the perfect and accomplished spiritual guide one remains distant from true Hajj. First hold the beloveds hand then your journey can be successful. Your beloved spiritual guide will guide you towards a beautiful passage. Never leave your spiritual guide’s hand as there are enemies everywhere. Our enemy from the beginning of time i.e. Satan is beside us. If the spiritual guide is with us, all the troubles will end. If you keep on reciting the name of spiritual guide the Divine closeness is near. The Holy Prophet is that spiritual guide who is beautiful and no one is like Him. If your heart says then come on the  door of Najib.

Mahnama Sultan-ul-Faqr Lahore (monthly Urdu magazine of Tehreek Dawat-e-Faqr) has published this article titled as Fazeelat-e-Hajj in the issue of July 2019.  Mamoona Asad Sarwari Qadri has originally written this and Zainab Moghees Sarwari Qadri has translated in English. If you wish to read it in Urdu then please visit the link: