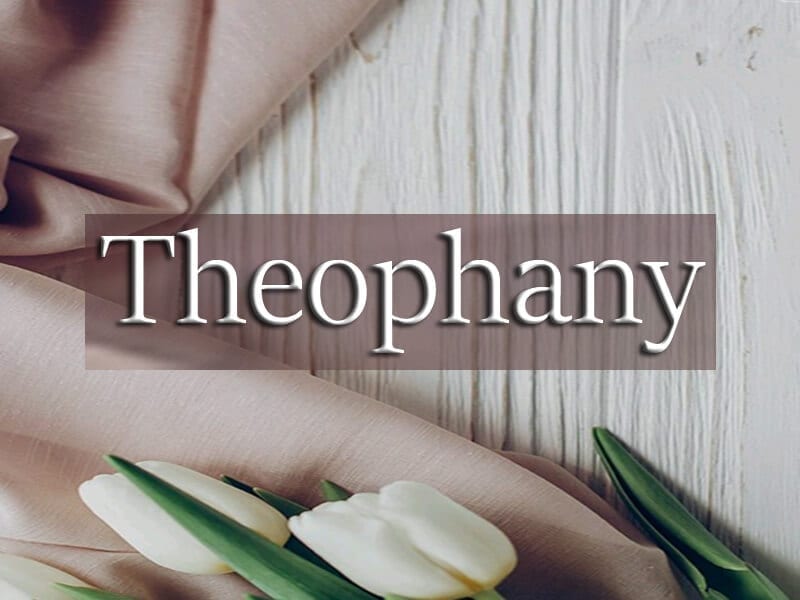 Infact, Prophet Mohammad is the perfect manifestation of Allah as it is a Hadith of the Prophet;

After the Prophet Mohammad passed away, Allah has been manifesting Himself in perfect human being. Moreover, Allah will keep manifesting Himself as it is the purpose of this universe. As one is required to a medium to reach Allah, therefore Allah chosen the Universal Divine Man for manifestation of His theophanies.

How to experience Theophany

Explanation: Undoubtedly, the light of Allah and Prophet Mohammad has manifested itself in many perfect forms. Although light has no colour but still it is present in every colour. Indeed, the whole universe is invoking Hoo. Certainly, Mohammadan reality is present which is infact the manifestation of Allah.

Soul is infact the light of Allah. Hence, it is a fact that Allah manifested Himself in the form of theophanies.

Reason of creation of Universe

Meaning:  I was the hidden Treasure. I intended to be recognized so I created the creature. My manifestation completed in the Universal Divine Man who is the fountain head and eye of the Reality of My Essence

Theophany and Realm of First Manifestation

Prophet Moses could not withstand the theophany of Allah. But the Fakirs of Mohammadan umma have blessings of thousands of such theophanies. Sultan Bahoo says;

Explanation: The theophany of Divine light which Prophet Moses beheld on the Mount Tur, manifests in my own existence by the grace of Allah.

Sultan Bahoo has narrated fourteen type of theophanies. He says;

First is the theophany of sharia which appears on the forehead. Moreover, it enlightens the physical eye. So, the seeker observes the reality of things.

In addition, second is the theophany of mysticism (tariqa) from which the Divine light radiates. Thus, it sanctifies the inward.

Next, is the theophany of Reality (haqiqa) from which radiates the Divine light. Thus, it enlightens the soul.

Moreover, fourth is the theophany of gnosis (marifa) whose light reaches the secret (sir’r). Hence, it reveals the Divine secret.

Next is the theophany of Divine love from which the light of secrets of Allah radiates.

Sixth is the theophany of spiritual guide. Infact, it creates the light of love and sincerity.

Next is the theophany of Faqr. Thence, its light discards everything other than Allah from the inward of seeker.

Moreover, eighth is the theophany of angels. Infact, radiates the of glorification of Allah.

Next is the theophany of jinn which creates insanity and madness.

Moreover, tenth is the theophany of inciting innerself. Consequently, it creates lustful desires.

Moreover, eleventh is the theophany of Satan. Hence, it inclines the person towards sin and disobedience.

Next is the theophany of sun. Thus, it produces the lightning.

Thirteenth is the theophany of moon which produces the light of reflection.

Lastly, fourteenth is the theophany of medium of the Divine names. Therefore, it is. Ism-e-Allah Zaat (اَللّٰہ), Ism-e-Lillah (لِلّٰہ), Ism-e-LaHoo (لَہُ), Ism-e-Hoo (ھُوْ). Moreover, it includes the ninety nine beautiful names of Allah, Ism-e-Faqr (فقر ) and Ism-e-Mohammad (محمَّد). In addition, from every letter of name, light like flame of a candle rises which enlightens the seeker. However, the seeker must not stay at any level of the theophany. Thus, he should move forward and not feel proud on attaining any level. The Holy Prophet said:

Meaning: Peace is forbidden upon the inwards of the Saints. (Ain-ul-Faqr)

One kind of theophany is Divine light. Infact, it originates from the light of Divinity, Prophet of Allah, inward, the soul and the secret, angels and men of Islam. When all these lights physically and spiritually accumulate in the existence, the following felicities are achieved;

Second kind of theophany is fiery. Infact, it is the fire of the innerself (nafs). Thus, it means anger, rage, hostility and spite. Infact, it is the devilish fire which begets avarice, greed, love for worldliness and sin. Moreover, it is the fire which creates the desires of inclination of creation, promotion in the worldly grades. Moreover, it creates the desire to subjugate of people and annihilation in jinn and devils of the unseen world. So much so, he becomes edict of wine, involves himself in forbidden deeds, heresy. Resultantly, he renounces salat and turns reprobate by leaving hajj and zakat. Moreover, he develops sympathy with the infidels and Jews.

When all these types of fire enter the being, the inward becomes dark. Thus, the attributes of Pharaoh appear in the person. Resultantly, there remains no discrimination between good and evil. Therefore, these stations are fiery and deceptive. Here whatever you see, do not trust it. Infact, all this is reprobation and against the sharia, curse on it. (Majalisa-tul-Nabi)

Meaning: Women are as devils for us. Hence, I seek refuge of Allah from them and from the evil of devils. (Ain-ul-Faqr)

Tajalli is an Urdu article of the magazine “Mahnama Sultan-ul-Faqr Lahore” for the June 2019 issue. Originally penned by Raffia Gulzar Sarwari Qadri and translated in English by Mohammad Abdullah Sarwari Qadri exclusively for the website. If you wish to read the article in Urdu, click the following link: