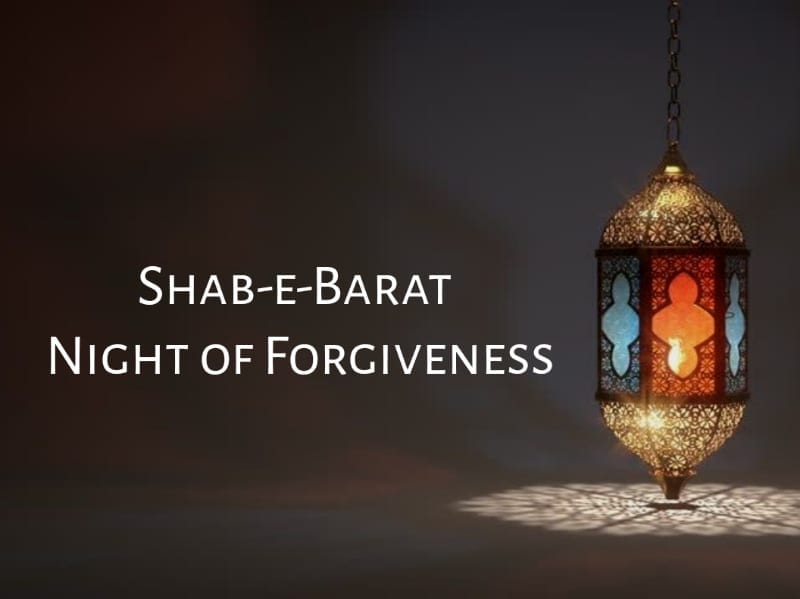 Shab-e-Barat is the night between the 14th and 15th of the Islamic month of Sha’ban. Shab-e-Barat is also known as Barat Night, Bara’a Night or the night of forgiveness. During Shab-e-Barat, Allah Almighty accepts the repentance of His slaves and forgives their sins. Allah created 12 months in a year when He created the system of the universe. He exalted some months over others. Amongst the 12 months of the year, Ramadan enjoys the highest status of all the months. Similarly, He exalted some nights over others and thus He gave superiority to Shab-e-Barat over other nights.

Meaning: Ha-Mim. (Only Allah and the Messenger [pbuh] know the real meaning.) By this Light-Giving Book. Surely, We have sent it down in a blessed night. Surely, We are the Warner. In this (night i.e. Shab-e-Barat) judgment is given on all matters of wisdom (separately), By Our command; surely, it is We Who send. (It) is mercy from your Lord. Verily, He is All-Hearing, All-Knowing. The Lord of heavens and earth and all that is between them, provided you have faith with certitude. (44: 1-7)

The Superiority of 15 Shaban

Ayesha bint Abi Bakr (ra) relates that the Holy Prophet (pbuh) once asked her about Shab-e-Barat:

O Ayesha! “Do you know what happens during this night? I asked: “O Allah’s Messenger, what happens in this night?” He replied: “During Shab-e-Barat, record is made of every human being who will be born.  And of every human being who will pass away this year. During this night of forgiveness, their deeds are taken up to heavens and their provisions are sent down.” The angels appointed on these tasks are informed about these decisions.

After sunset on the 14th day of Sha’ban (which marks the beginning of Shab-e-Barat), Allah descends to the first heaven. He calls to His slaves: Is there anyone who wants forgiveness so We may forgive him, anyone who wishes to increase his sustenance so We may increase his sustenance, anyone wants release from his sufferings so We may rid him of the sufferings. Allah continues to call His men throughout this night until next dawn. Therefore, we should perform as much supererogatory prayers during Shab-e-Barat as possible. And we should fast during the day to gain Allah’s mercy and His forgiveness.

During the early days of Islam, the sacred Companions of the Holy Prophet (pbuh) and famous scholars who followed them used to specially observe on this night. Prayers and devotions during this night of forgiveness have special importance due to multi-fold increase in reward.

Some people have devised some special ways of performing supererogatory prayers during Shab-e-Barat. Some people have even published Shab-e-Barat Dua that is believed to carry lot of reward. It is also believed to help in speedy acceptance of people’s wishes. However, there is no such thing proven from the life the Holy Prophet (pbuh) during night of 15th of Shaban. The same is the case for the sacred Companions. People are free to remember Allah in any way they like throughout this night. For example by reciting Quran, invocating and contemplating Ism-e-Allah Zaat and seeking forgiveness from Allah Almighty. It is Allah’s attribute to forgive His men. And during the sacred night of 15 Shaban, Allah’s attribute of forgiveness is at its peak.

Fasting on the occasion of Shab-e-Barat

The Holy Prophet (pbuh) declared the month of Sha’ban his month. He used to fast throughout this month. However, people who cannot fast for the whole month may only fast for two days i.e. the 14th and 15th or 15th and 16th of Sha’ban in observance of Shab-e-Barat. The angels present previous year’s deeds of every human being in the court of Allah Almighty on this night. During the same night i.e. Shab-e-Barat, Allah entrusts list of all the events that are destined to take in every human’s life until the 15th of Sha’ban the following year to the angels. However, Allah Almighty accepts the prayers from His men during the sacred night of forgiveness. Through His benevolence and mercy, He also alters their fate as He wills.

It is custom in some countries for people to visit graves of their deceased on Shab-e-Barat. Although, it is not proven from Hadith or Sunnah of Holy Prophet, however there is no harm in doing so.

Whose Repentance Allah does not accept?

Shab-e-Barat is a night of forgiveness during which Allah accepts prayers of His men. However, even during sacred night of 15 of Shaban, there are certain people whose prayers Allah does not accept. It is those people who commit major sins until and unless they repent with complete sincerity and promise to not commit such sins in future. The following hadiths elaborate this further:

Allah has made Shab-e-Barat a night of forgiveness for His men to seek liberation from such bad habits and to start a new chapter in their lives.

How can we succeed in life

Explanation: In this verse, Sultan Bahoo is referring to one’s innerself. The innerself in human beings is the home for all evil habits and deeds. All evil thoughts originate from here within one’s self. This is due to the esoteric diseases that the innerself is inflicted with. Only an accomplished spiritual doctor who knows their remedy can cure them.

Under the auspicious leadership of Sultan-ul-Ashiqeen Hazrat Sakhi Sultan Mohammad Najib ur Rehman, Tehreek Dawat-e-Faqr is striving to spread the message of Faqr to the masses so that they can achieve spiritual elevation and succeed in achieving their purpose of life.

Sultan ul Ashiqeen is the 31st and present Shaikh of Sultan Bahoo’s Sarwari Qadri order. He established Khanqah Sarwari Qadri in 2009 in Lahore to spread the beneficence of Faqr to mankind. Every Sunday, he meets devotees and disciples at the Khanqah and blesses them with his Divine company. He grants the invocation and contemplation of Ism-e-Allah Zaat to devotees following Bayah – oath of allegiance. He guides his disciples spiritually as well as exoterically and leads them to their destiny through his Divine company.

This will eventually lead them to the exalted court of the Holy Prophet – The Mohammadan Assembly. And then from there on to attaining Divine vision and pleasure of Allah which is the purpose of our lives.

Anyone seeking to attain closeness and pleasure of Allah and benefit from the true Fakir and Universal Divine Man of this era should contact the Khanqah Sarwari Qadri in order to meet Sultan ul Ashiqeen and take oath on his sacred hand to start his journey of spiritual salvation.

This is English translation of the Urdu article شب برات (Shab-e-Barat). The Urdu article appeared in the April 2020 issue of the monthly Sultan-ul-Faqr magazine. Mrs Maimoona Sarwari Qadri wrote the original article in Urdu and Waheed Hassan Sarwari Qadri has translated it in English.