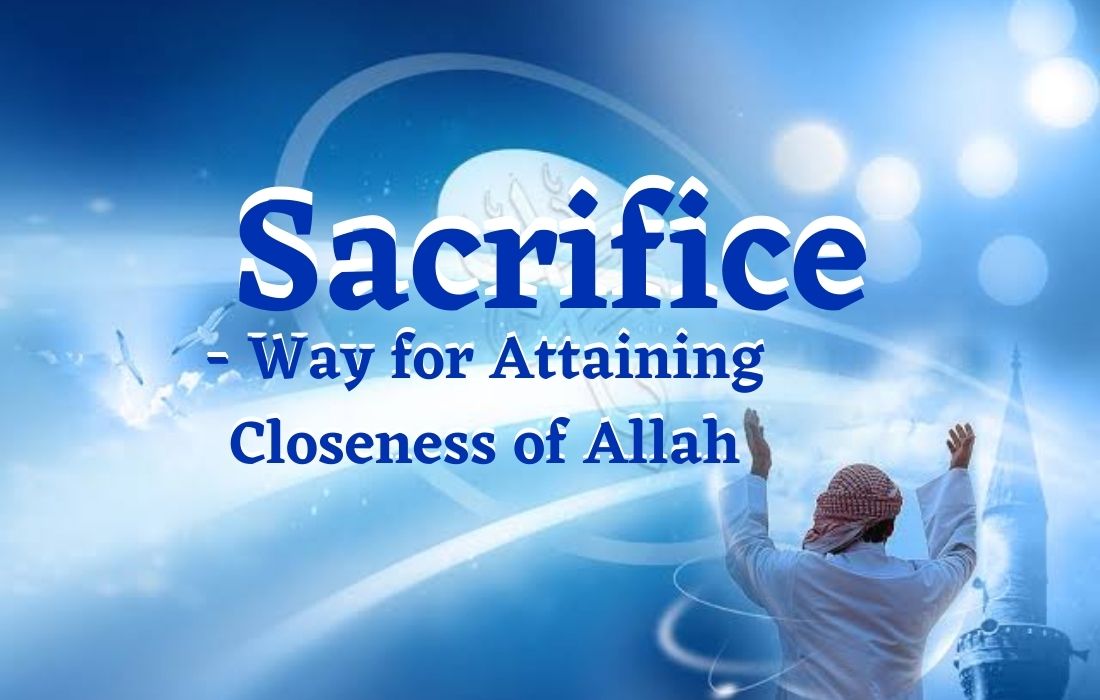 “Sacrifice” is derived from the Arabic word “qurb” which literally means closeness. In literal sense sacrifice is an act in which a person renounces all his dear things and relationships in order to attain nearness to Allah Almighty and to show in practice and inwardly that he has no relationship or a thing beloved than Allah Almighty. According to Shariah, sacrifice means slaughtering a halal animal in the way of Allah.

Meaning: (O Most Esteemed Messenger!) Relate to these people the account of the two sons of Adam (Habil and Qabil [Abel and Cain]) which is absolutely true. When both of them made offering (one each to Allah), the offering from one of them (Habil [Abel]) was accepted, whilst that from the other (Qabil [Cain]) was not accepted. Therefore, he (Qabil) said to Habil (out of jealousy and vengeance): ‘I will surely kill you.’ He (Habil) said (in reply): ‘Indeed, Allah accepts (offering) only from the people of piety.’

Meaning: And We have appointed a sacrifice for every person so that (at the time of sacrifice) they may invoke the Name of Allah over the cattle (i.e., quadrupeds) that Allah has provided for them. And your God is (only) One God, so submit to Him alone, and, (O Beloved,) give good news to those who remain submissive.

Meaning: Say: ‘My Prayer, my Hajj (Pilgrimage) and my sacrifice (together with entire worship and servitude) and my life and my death are for Allah alone, the Lord of all the worlds.

So pray to your Lord and offer sacrifice (a token of gratitude).

Meaning: “The son of Adam does not do any deed on the Day of Sacrifice that is dearer to Allah than shedding blood. It will come on the Day of Resurrection with its horns and cloven hoofs and hair. Allah accepts it before its blood reaches the ground. So be content when you do it.”(سنن ابنِ ماجہ، جلد2، باب ثواب الاضعبہ ،رقم:1045)

So, the sacrifice that is made with sincerity of heart is accepted in the court of Allah Almighty as soon as the intention is made. The seekers of Allah are the ones who, if they are asked to sacrifice anything, they won’t hesitate even for a moment and obey the command immediately. Hence longing for nearness to Allah does not deter them from making any sacrifice.

Sacrifice on Eid al-Adha is to gain piety

The philosophy behind sacrifice is to ensure sincerity, spirituality, piety and to kill the inciting innerself. In the sight of Allah the only thing that matters is the deed that is done for the pleasure of Allah which is free from hypocrisy.

The sacrifice of animals on the occasion of Eid ul Adha is in fact an attempt to revive the same spirit of self-sacrifice, otherwise flesh and blood doesn’t reach Allah at all, but sincerity and humility.

The chain of sacrifice began from the time of Prophet Adam (as) and has been the practice of all the Prophets. Holy Prophet (pbuh) said: “We, the group of Prophets, are put to trials and difficulties according to our ranks.”

Trail of Prophet Ibrahim and Ismail

Prophet Ibrahim (as) was a glorious prophet of Allah Almighty. Hence, he had a higher rank which meant bigger and more difficult trials. Prophet Ismail (as) was one of the Prophets of Allah and the eldest son of Prophet Ibrahim (as). Quran mentions him as the honest (Sadiq) one. He was born from the blessed womb of Hazrat Hajra (as). In his childhood, his father, upon the order of Allah left him along with his mother in a barren and desolate area that is now known as Makkah and is the Qiblah of Islamic world.

One day Prophet Ibrahim said to his son Prophet Ismail that I had a dream that I am slaughtering you. Now tell me what is your opinion? So he (Ismail) answered you’ll find me steadfast. When Prophet Ibrahim laid him on the floor to slaughter.

A voice came from Allah:

Meaning: “And We called out to him: ‘O Ibrahim (Abraham)! (How wonderfully) have you made your dream really true! Surely, We pay back the spiritually excellent the same way. (So you are blessed with the promise of Our closest friend.) It was by far a great open trial. And We ransomed him with a great sacrifice.”

Interpreter or commentators state that Allah sent down a ram that Prophet Ibrahim slaughtered. In remembrance of the same sacrificial spirit of Prophet Ibrahim and Ismail, Muslims sacrifice animals on the occasion of Eid ul Adha.

Time of sacrifice starts from 10th of Dhu al-Hijjah after Eid ul Adha prayers and ends at sunset of 13th of Dhu al-Hijjah. It is better to offer sacrifice immediately after Eid ul Adha prayers. Prayer should be performed without eating or drinking anything and the first meal of the day should be the meat of the sacrificed animal. This was the Sunnah of the Holy Prophet (pbuh) and His companions.

Animals to sacrifice can be goat, sheep, ram, cow, buffalo, and camel. The age for the goat and the sheep should be at least 1 year. Age limit for cow and buffalo should be at least 2 years and for camel at least 5 years. The animal should be free from all kinds of defects. Abdullah Bin Umer (ra) said: The sacrifice of goat, ram or sheep counts for one person.

Jabir ibn Abdullah (ra) said: We offered sacrifice along with the Prophet (pbuh) in the year of Hudaibiya. Sacrifice of camel and cow can count sacrifice of up to 7 people.

Prophet Mohammad (pbuh) used to sacrifice the animal himself. Therefore, it is desirable to make the sacrifice yourself or to help during slaughtering.

When the month of Dhu al-Hijjah begins and one of you wishes to offer sacrifice, shouldn’t cut his hair or his nails.

28 thoughts on “Sacrifice – Way for Attaining Closeness of Allah”