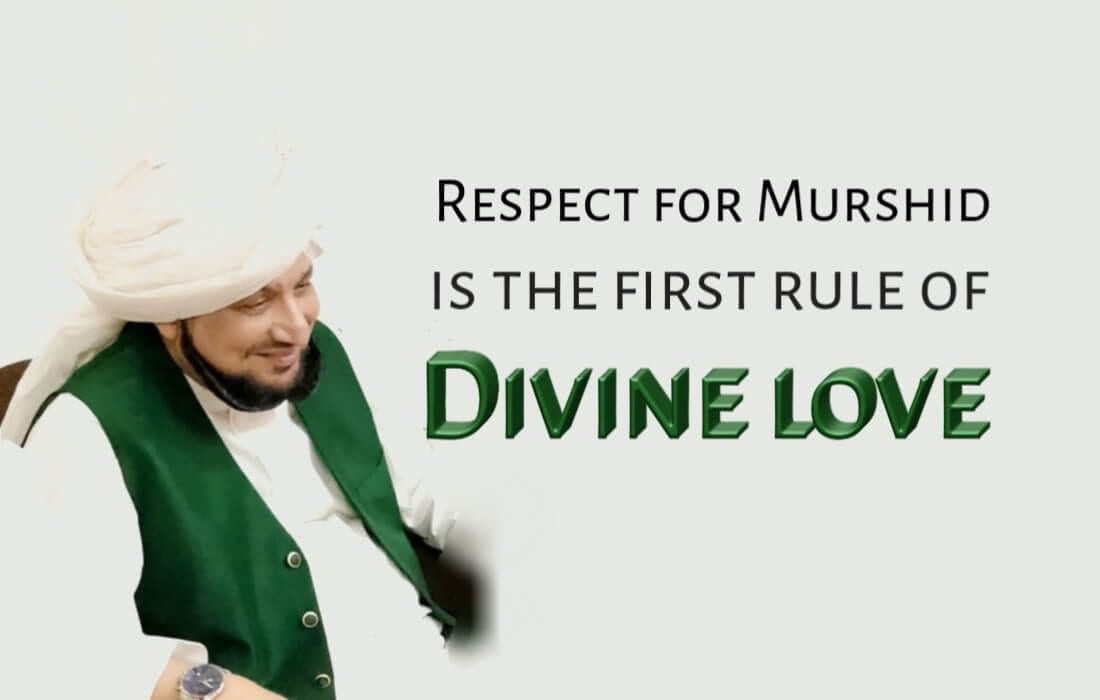 Is The First Rule Of Divine Love

The world’s most arduous task is to make human a human which is in fact a task of a Murshid assigned him from Mohammadan Assembly.

What is the meaning of Murshid?

Murshid is a spiritual guide who purifies the inwards of seekers of Allah. Thus, Murshid Kamil takes them to the court of Allah and makes them successful in front of Allah.

Apparently, it is a little sentence but it holds such deep meanings that only a person who is passing through or has passed the stages of becoming a true human will understand it.

What is the standard of being human in Islam?

We call ourselves human based on a few physical attributes, appearance, and features. However, the standard of human and humanity is quite different in Islam. According to statistics, there are about eight billion people in the world. They are all human regardless of color, race, religion, or nationality. But the creation whom Allah made His representative and noblest of all creatures does not become deserving of calling human based on few physical attributes. As Allah says in Qudsi Hadith:

Meaning: There are many who are created donkeys in the form of human.

It means that apparently they are human but their status is not more than that of a donkey near Allah. They are those unfortunate ones who are devoid of respect. One may become a great scholar but if he doesn’t learn the respect then that knowledge is of no use to him. As it is famously said:

Meaning: Respect is the first rule among the rules of Divine love.

One may attain numerous degrees, gain knowledge or add scholastic titles to his name. However if he doesn’t learn the respect, he is like a donkey in the form of human near Allah.

It is also a fact that knowledge does not teach respect. It is an influence of company and a relation. For that one must adopt the company of a man of Allah i.e. Murshid.

Respect is the first rule of love

Allah has mentioned numerous times in the Holy Quran:

Meaning: Obey Allah and obey the Messenger (peace be upon him). (Al-Nisa 59)

In obedience the component of love is necessary and first rule of love is in fact to respect. The fact is verified even from the worldly relations that wherever there is love there is a respect. Love demands that if you claims to love someone, then you respect them and their opinion, and not refute them. You also prefer the desire of beloved over your own, and whenever you mention their name, you mention it with utmost respect.

What does Allah’s love demand?

If such are the demands of worldly love then should we not bear in mind the respect while expressing our love for the One Who loves us seventy times better than a mother’s love and Who is most worthy of our love? Indeed we must!

This love demands that in every walk of life one must obey the commands of Allah. One should remain within His set limits, and become submissive to His will, likes and dislikes. It is only possible when we not only obey Allah’s Prophet but also the beloveds of the Allah’s Prophet. They are those perfect Fakirs (Murshid) though whom Allah has continued to manifest the light of guidance for His creation after the end of Prophethood. About these perfect Fakirs Allah says:

Meaning: O believers! Obey Allah and obey the Messenger of Allah and those (men of truth) who hold command amongst you. (Al-Nisa 59)

Sultan Bahoo has used many names or titles for these men of truth like al-Insan al-Kamil (the Universal Divine Man), Fakir-e-Kamil (perfect Fakir), Murshid Kamil Nur-ul-Huda (Murshid who is the absolute light of guidance), Fakir Maalik-al-Mulki (Master of universe) or Murshid Kamil Akmal.

Therefore, it is evident from above mentioned Hadith that following Murshid or obeying Murshid is essential.

Respect of perfect Murshid is obligatory to gain success

The respect of perfect Fakir or Murshid is obligatory. Respect of a Murshid demands that when he invites the creation of Allah towards the Truth, one must listen to him with respect and accept his invitation.

When Murshid passes the devotees through trials for the sake of sanctification of inciting innerself, one must respect the way of his training and keep a firm belief that indeed every action of Murshid has a hidden wisdom behind it. One must submit to the will of his Murshid respectfully and sincerely by deferring his knowledge and wisdom. When he gets an honor of going to the court of Murshid, he must go with extreme respect and humility and sit wherever he find a spot keeping in mind the etiquettes of his gathering. The seeker must keep a firm belief that a Murshid is well aware of the inner states and his one spiritual glance has the efficacy to transform the esoteric world of a sincere disciple.

Explanation: I have seen such efficacy in the spiritual sight of Saints that alters the destiny of many.

Etiquettes of gathering in the company of Allah’s Prophet

Meaning: O believers! Do not raise your voices above the voice of the Prophet, and (also) do not speak to him so loud as you are loud when you  speak to one another (lest) all your actions should come to nothing (including your faith)  and you are not even aware (that your faith and all pious deeds have been wrecked). (Al-Hujurat 2)

Level of respect of the Companions of Allah’s Prophet

When the Companions of Holy Prophet used to come in the company of the Prophet, they remained absorbed in the vision of the Prophet of Allah. When the Messenger of Allah talked, they listened to him with extreme devotion and attention. They remained seated in his company for several hours with such silence, respect and humility that birds will come sitting on their heads. Whenever the sacred tongue of the Prophet issued any guidance or command, everyone tried to surpass others in obeying it.

What must be the level of respect for a Murshid?

The same rule of respect should be adopted for the spiritual successor of Prophet Mohammad, the Universal Divine Man and accomplished Murshid. Because Murshid is a pious man of Allah who is on the footsteps of Prophet Mohammad and is performing a duty of guiding the umma. The seekers should learn from the Companions of the Holy Prophet as how they adopted respect in the company of Holy Prophet following the command of Allah. Exactly like that, the seekers of Truth should bear every aspect of respect and reverence for their Murshid. Those who respect Allah, His Prophet and His representative Murshid sincerely are deserving of achieving the blessing of piety from Allah’s court.

Meaning: Assuredly, those who keep their voices low in the presence of Allah’s Messenger (out of profound veneration and submissiveness), it is they whose inwards Allah has chosen for piety. For them alone is forgiveness and an immense reward. (Al-Hujuat)

Here Allah Himself is stressing upon being respectful. He mentioned the  reward of respectful ones and punishment of those who are disrespectful. Hence there remains no doubt in the importance of this command.

By drawing the picture of His beloved Prophet as a teacher and Murshid Allah made it obligatory upon the seekers of Allah till the Doomsday that if they desire to achieve piety and closeness of Allah then first they must step on the ladder of respect. Love, ishq (ardent love) loyalty and sacrifice come subsequently.

Islam laid the foundation of humanity

Islam is a religion that taught humans to respect humanity, respect parents, elders, teachers, relations and in a particular women. There was a time when people buried alive newborn girls. The sharia of Holy Prophet ended this brutish tradition and all other fallacious customs. The foundation of today’s developed society is all laid by Islam. If Islam had not built the foundation of respect, the humanity would indeed have been disappeared from the face of  Earth.

Islam is a religion that teaches the respect of those who give worldly education. Then what would be the rank of respect of a Murshid who makes a human a true human? A Murshid with his perfect spiritual sight purifies the inward of a seeker. A true Murshid makes him able to become the traveler of path of gnosis of Allah and Mohammadan Assembly by sanctifying his inciting innerself. Accomplished Murshid enlightens the inward of seeker with the gnosis of Allah by removing filth of world and its desires. Such a Murshid liberates the seeker from bad attributes and spiritual diseases. He makes him a human who is Mystic (al-Arif), beloved of Allah and beloved of the Holy Prophet. Indeed only a perfect spiritual guide has the authority to perform this task with his perfect spiritual powers.

Who is the perfect Murshid of the present era?

The perfect Fakir, the Universal Divine Man, and the accomplished Murshid of the present time Sultan Mohammad Najib-ur-Rehman has sanctified the innerself of countless seekers of Allah and made them successful in the purpose of life. There are numerous who are passing through the stages of spiritual training in the company of the perfect spiritual guide Sultan-ul-Ashiqeen. They are achieving the destinations in the path of Faqr every day, in fact, every moment.

Whether it is exoterically or esoterically, a successful seeker is the one who respects his teacher i.e. his Murshid wholeheartedly. A seeker who comes to the court of the perfect spiritual guide with sincerity, humility, and respect indeed gains beneficence.

Explanation: The ill-mannered and uncultured people are not aware of the respect and regard of the greatly venerable ones. Because of their wretchedness, they are unfortunate. Although the inherent nature is not changeable without the invocation, contemplation of Ism-e-Allah Zaat, and the guidance of the perfect spiritual guide. Those who are eternally unfortunate and damned cannot become the fortunate ones. As the earthen pots do not turn into those of the porcelain. The disrespectful people, whether they are disregardful towards Allah, the Prophet, the Companions, the People of Cloak (Ahl al-Bayt), the Fakirs or the spiritual guide, remain deprived of the gnosis of Allah in both the worlds. As a proverbial saying means ‘The respectful one is successful while the impudent turns wretched.’ The one who did not seek the Divine presence became empty-handed in both worlds.

It is a humble prayer in Allah’s court that may He grant us the ability to come to the court of perfect Murshid of the era Sultan Mohammad Najib-ur-Rehman with respect and sincerity and gain beneficence of Mohammadan Faqr and become a true human. Ameen!

in the issue of July 2020. It was originally written by Waqar Ahmad Sarwari Qadri and is now translated in English by Sofia Sultan Sarwari Qadri. Translator has used American English vocabulary in the translation of this article. To read the original article, please visit: