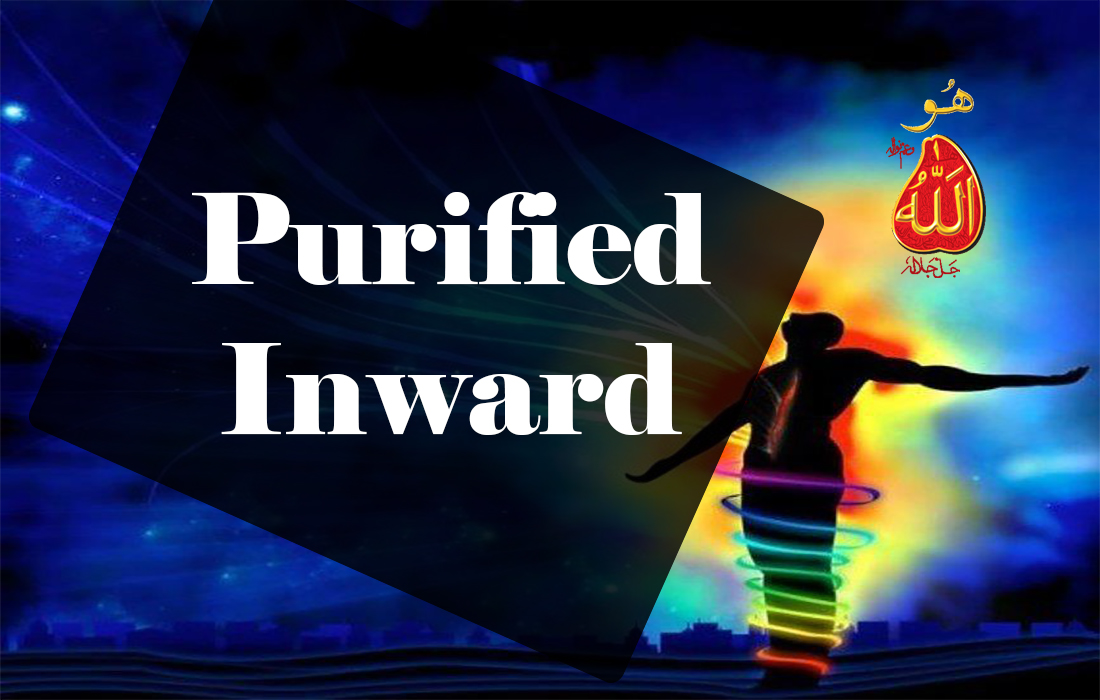 Likewise, the word “Purified” has four components; secure, eternal, perfect belief, death before dying. A man of perfect inward is one who searches and discovers, and desires vision of Allah. If someone wills to defeat all diseases of his soul, and reaches the level of Marifah and vision of Allah, such strong inward is a purified one. An inward filled with Divine Light is secured. When someone surrenders in front of their Lord in every way possible, and is satisfied with any decision his Master takes, he has a sanctified inward. One who accepts the truth, stays on the right path. This is the path of Allah’s blessed souls. A purified inward is such that when the person meets Allah, there is no one other than Allah present. The Quran has announced the sanctified inward the reason of entering Paradise on Judgement Day:

The day when neither wealth nor sons will profit. But he alone (will be the gainer) who appears before the presence of Allah with a heart protected (from) and pure (of all evils).’ (26: 88-89)

A tradition from Imam Jaffar Sadiq says, “A man of the inward keeps pure intentions. An inward free of evil and doubt, helps keep intention for everything pure.”

Role of the Inward

Every organ in the human body has a distinctive role. If it carries out its function properly, it is healthy, if not then it’s considered ill. The heart’s role is to circulate blood around the entire body. Likewise, the functions of the inward (spiritual self) are as follow:

Since all our success is dependent on the purgation and sanctity of the inward, what can we do to make it look presentable before Allah?

The settlement stage of the inward isn’t easy. The journey from inward to Purified inward is extremely difficult. This is why it is known as the Greater Jihad. Iqbal says:

And people think it’s easy being a Muslim

The first and foremost condition of a Purified inward is that it consists of the Divine Light.  This is impossible without invocation and contemplation of Allah’s Personal Name. Allah says:

Translation: Allah is the Guardian of the believers. He brings them out of (all kinds of) darkness and takes them towards the light. (2: 257)

A Perfect Spiritual Guide’s job is to purify a seeker’s inward of darkness and fill it with Divine Light.

Importance of a Perfect Spiritual Guide

Therefore, a perfect spiritual guide through his spiritual sight, sanctifies souls of the seekers. And their souls ascend from inciting self to the repenting self. From repenting self they ascend to the inspiring self and finally, satisfied self or the soul at peace. He helps them walk the true path of Allah successfully. The only veil between man and Allah is that of the nafs (innerself). So when the nafs is satisfied and under control, man gains closeness with Allah. However, if someone still believes he can attain this closeness without a spiritual guide, Rumi says:

“Whosoever travels this path without a spiritual guide, is misled by evil and loses.”

A perfect Fakir’s spiritual sight turns the ill-fated to fortunate, and an evil being to a divine being. That’s how the person fights his nafs and awakens his inward. With the nafs under control, he becomes man of Marifah and a perfect believer.

Even this soul enjoys being martyred by his spear

Nothing better than the word “Faqr” describes the above stated phrase. Whoever has the blessing of Faqr owes it to his sanctified soul. This philosophy seems simple but when a seeker ponders over it, he discovers a lot more divine secrets. He realises his destiny is exactly the point he started from. Which means his beginning as well as his ending are both divine light (Noor-e-Ilahi). He annihilates himself in Noor e Ilahi. The Prophet pbuh says:

Create a bond with Ahad (Allah) and Ahmad (Mohammad), and let go of the Abu Jahl of the body.

This quote is directed towards Awais Qarni, who hadn’t physically seen the Prophet. Yet he set an example of recognising him on the inner and sank in the ocean of ardent love. Whereas, Abu Jahl was physically close to the Prophet, still he couldn’t realise his divine reality.

Indications of a sanctified inward:

My Spiritual Guide taught me a lesson:
“Any moment you are negligent from remembrance of God is a moment spent in denial of God.”

“You just remember Me and I shall remember you.”

A sanctified inward’s second indication is that this person follows Allah’s commands. A seeker should wholeheartedly follow each command of Allah, without complaining. He should not be bothered about the rewards, instead be focusing on performing his duties. Allah says:

And whoever obeys Allah and His Messenger (blessings and peace be upon him) are the people who will be in the company of those (spiritual dignitaries on the Last Day) whom Allah has blessed with His (special) favour: the Prophets, the truthful, the martyrs and the most pious. And how excellent these companions are! (4 : 69)

Guilt in case of Disobedience

The third indication is that if a person fails to obey one of the rules, his inward fills up with Allah’s fear and he seeks His forgiveness. He should be ashamed, not because he wants to be praised or he is afraid of Allah’s wrath. Instead, he should be afraid of losing Allah’s Vision.

O contented (satisfied) self! Return to your Lord in such a state that you are both the aspirant to, and the aspired of, His pleasure (i.e., you seek His pleasure and He seeks yours). (89 : 28)

Indifferent to the world and its affairs

This is the fourth sign of a purified soul. This state is the most difficult to achieve. People forget Allah, lost in the world’s distractions. Even though the sole reason Allah created humans was for Him to be recognised. Sultan Bahoo says:

One should live in this world like a boat floats on water. If the water comes in the boat, it will sink. But if the boat stays afloat, it shall reach its destination. Likewise, if a man lives in this world, but the world doesn’t live in him, he shall reach Allah’s Union.

One cannot acquire a purified inward without having righteous divine love within. People who have gained Allah’s closeness and Divine Love are Company of the righteous. For example; if a person sits at a perfume shop, he will eventually start smelling like the perfumes. An example for bad company is like that of a blacksmith’s shop. A person sitting nearby might burn his clothes. And if not, he will most definitely be affected by the heat. May Allah save us from bad company. Ameen.

This verse shows we should ask for the company of His good men. Allah loves His pious men and lets go of His anger due to them. Allah also forgives sinners. And there is no beneficence without the acknowledgement of the Prophet.

A point to ponder upon is that when someone intends to buy something, they look for its warranty. And when he or she is satisfied, makes the purchase. Even though deep down he knows the thing won’t last forever. Allah says:

Without a perfect spiritual guide, no one can practice, verify or believe in the true spirit of Islam. Even if they physically worship day and night, they will be destitute of a purified inward. With physical knowledge you gain physical education. By taking oath of allegiance at the hand of a perfect spiritual guide, you gain Marifah. Therefore, fakirs will carry on this practice that started from our Prophet (pbuh), till the end of the world. A perfect fakir exists in every era, that shows Allah’s creatures the path of Marifah and vision of Allah. He helps them walk firmly on this path of spirituality.

Sultan ul Ashiqeen Sultan Mohammad Najib ur Rehman is the Perfect Spiritual Guide of present era. He is the Founder and Guardian of Tehreek Dawat e Faqr. He is the 31st Perfect Shaikh of the Sarwari Qadri Order. Sultan ul Ashiqeen with his perfect spiritual sight, bestows spiritual success upon every seeker. Whosoever pledges allegiance to him, recognises his role and duty in this world. And each seeker gains only as much as he desires. Therefore, whoever comes to him with pure intentions and desire of Allah, he blesses him with vision of Allah. They then become member of the Mohammadan assembly. O wise one! This path is that of belief, you must come with it. Leave logic miles away from this way, so you can gain what you seek.

It’s good to see logic whilst listening to you heart. But it’s also good to sometimes leave logic behind

So, the perfect inward can gain the divine light under the guidance of a perfect Fakir. When his inward fills with divine light, he also appears divine physically. Whoever sets out in search of the path of truth has definitely discovered it. Allah seeks man more than man seeks Him. One should know, it is only possible to reach these levels of Marifah, through guidance. If you seek Marifah without the company of a perfect spiritual guide, it is in vain.

An alehouse can make you forget the world

I found from the chains of heaven, chains of the alehouse