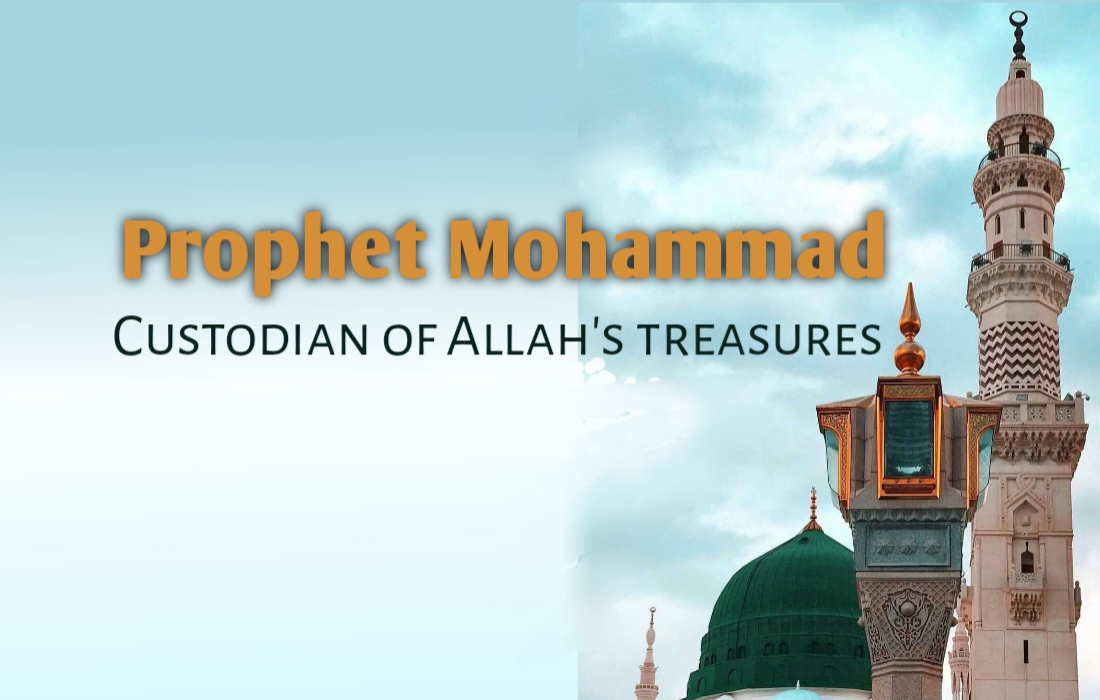 Prophet Mohammad (peace be upon him) holds the exalted status of beloved of Creator of both the worlds. Without him, faith is imperfect. Allah created all the realms and their creations just for him. He says in the following Qudsi Hadith:

There are ninety-nine sacred names (asma-un-Nabi) of the Holy Prophet. One of them is Qasim. The literal meaning of Qasim is ‘giver’ or ‘distributor’. Hence Prophet Mohammad is the distributor of Allah’s treasures to the creation.

Undeniably Allah created everything that exists in the universe. He is the Creator of treasures of heavens and the earth. However, He granted authority of all treasures to His beloved so that he bestows them to whomever he wills.

Questioning the authority of Holy Prophet

Many intellectuals raise questions why Prophet Mohammad is the only distributor of Allah’s treasures. There are other prophets also. Then why do they not distribute Allah’s treasures to their own ummas. For them the answer is in the following Qudsi Hadith:

That is to say, Allah created the universe for His beloved Prophet Mohammad. Now it is only natural that if something is created for someone, then he holds ownership and authority of that thing. Resultantly he may grant from his possession to whomever he wills.

If Allah describes Himself as the Lord of both the worlds, then He calls Prophet Mohammad as the mercy of all the worlds.  Whether it was an era before his birth or after or the period after his physical passing, the bounties and blessings of the Holy Prophet are continued since pre-existence and will continue forever.

Allah Himself expresses the grandeur of Prophet Mohammad

Meaning: Allah and His Messenger had made them affluent with His bounty. (Al-Tawbah 74)

Meaning: And (O Beloved) recall! when you said to him whom Allah had favored and whom you (too) had done a favor. (Al-Ahzab 37)

Meaning: And whatever the Messenger (blessings and peace be upon him) gives you, take that. (Al-Hashr 7)

It becomes evident from above mentioned verses that the Prophet exercises the total authority over all treasures created by Allah. He distributes them among Allah’s creation. He is not only a Messenger of Allah, but rather an absolute empowered entity of the whole universe.

Whoever receives Allah’s treasures receives them through Prophet Mohammad

Hence it is verified that Prophet Mohammad has the authority of entire reserves of all the worlds. He is authoritative of bestowing anyone whatever he wills. Thus, if someone receives any bounty or a blessing exoterically or esoterically, he only obtains it through the mediation of Prophet Mohammad.

Exoteric bounties imply riches of the world, sustenance, children, knowledge, and all created blessings of Allah. Indeed, Allah is the Creator of those blessings, but the beloved Prophet bestows them to whomever he wills.

Whoever supplicates in Holy Prophet’s court with firm belief and sincerity, he comes along with his Companions, Hasan ibn Ali and Husayn ibn Ali to bless him with his vision through physical eyes and guides him. (Aqal-e-Baydar)

This is the reason that Mumins (believers) prefer to pray through the mediation of the Holy Prophet.

The Messenger of Allah said:

Meaning: Faqr is one among the treasures of Allah.

Explanation: One glance of Faqr is full of treasures because Faqr

has them all in its custody.

Faqr is the true heritage of the Holy Prophet. The heir of this heritage is his true heir.

Faqr is the noblest of all treasures of Allah and only Prophet Mohammad distributes it. (Mujtaba Akhar Zamani)

Meaning: Faqr is a state of ecstasy and passion, surrender and submission to Allah’s will. It is the heritage of Prophet Mohammad and we are the guardians of it.

The so-called religious scholars of Islam who are diverting umma from true Mohammadan religion, disagree that Prophet Mohammad is distributing Allah’s treasures and blessings to the creations of all realms. They make the following objections:

Answer to the first objection

The Holy Quran, Hadiths and the books of perfect Fakirs answer well to these objections:

Meaning: I am from the Divine light of Allah and all Mumins are from me.

First, Allah created the Divine light of Holy Prophet then the whole creation was created from his light.

Imam Qastalani relates that Allah commanded Mohammadan light (Nur-e-Mohammad) to be attentive towards the lights of Prophets. Thus, the sacred Mohammadan light paid its attention to their souls and covered their lights with his celestial light. The Prophets asked:

O Allah who has covered us?

This is the light of Mohammad, if you would have faith in him you would be honored with prophethood.

All the souls of Prophets said:

We have faith in him.

In essence, all Prophets were granted prophethood on the condition of having faith on Holy Prophet. Prophet Mohammad was present in the era of every Prophet in the form of Mohammadan light. Hence blessing every nation. Thus, whoever received bounties of Allah, received through the medium of Holy Prophet.

Answer to the second objection

It is entirely unacceptable objection that Prophet Mohammad was only a Messenger and came in the world only to convey Allah’s message. The following verse of Holy Quran and Hadith which were also mentioned in the beginning are answers to this objection:

The words of Prophet Mohammad “I was given the keys of all treasures” mean all Divine treasures in the universe.

Answer to the third objection

The fools believe that the beneficence of Holy Prophet ended after his passing. For such foolish theorists, Sultan Bahoo says:

A liar cannot belong to my umma. (Kaleed-ul-Tauheed Kalan)

Prophet Mohammad is present that is why universe exists

The universe does exist. Its system is also running through which Allah is making us believe our existence. Then how is it possible that he for whom this universe was created is not present. Even such a thought is infidelity. Hence if Prophet Mohammad is present then he is also distributing the bounties per the command of Allah.

Since Allah has manifested in the form of Universal Divine Man (Mohammad peace be upon him) therefore everything is submissive to him. As Allah says in the Holy Quran:

Thus, whatever is in the universe is because of the authority of the Universal Divine Man (Mohammad peace be upon him) (Fusus al-Hikam)

All religious scholars in spite of their sects acknowledge Allah’s gnosis. Allah created man for His gnosis. Therefore no treasure is more precious to a Mumin than Allah’s gnosis

Divine gnosis is one of the secrets of Allah which Mystics gain from Prophet Mohammad’s court.

Now if someone says that Prophet Mohammad is not alive and is not distributing Allah’s treasures then it means after the death of Prophet Mohammad no human can gain gnosis of Allah. Resultantly failing the purpose of human creation. Now if human exists and is also gaining the gnosis of Allah according to his capacity then one must accept that Holy Prophet is also alive and is distributing Allah’s treasures.

Answer to the fourth objection

Those who consider Holy Prophet an ordinary human must very well understand that his sacred self is the one in whose love Allah created both the realms. Quran is absolute speech of Allah which He revealed on His beloved. Then He Himself revealed the status and grandeur of His beloved.

Whoever saw me in fact saw the Reality (Allah).

Meaning: O Mohammad! You are Me and I am you.

I am you and you are Me

Allah says to His beloved Universal Divine Man (al-Insan al-Kamil): My beloved, yourself actually is my Essence (Hooiyat), you are Me and I am you, it means, in yourself only I exist. You are exactly Hoo and Hoo is in fact Myself. My friend! Your existence is due to My will and the multiplicity in which you exist, in fact is based on My Uniqueness (Wahidiya). Rather My physical existence is because of you. I am meant by you. I am for you not for Myself. You are meant by Me, you are for Me, not for yourself. It means, we are not two different entities rather one. My beloved! You are the point on which the circle of existence is based, and in this circle, you are the worshipper and the worshipped. (Insan-e-Kamil)

There is no duality, only One exists

The entity who himself is the reason of creation in fact is the Essence of Allah on one side but on the other side is the sacred self of Mohammad (peace be upon him). If it is pondered over in depth, one can find out that they are not two different entities rather one. There is no duality, only One exists. In spite of their being apparently two entities they actually are same and similar. (Haqeeqat-e-Mohammadia)

Thus Universal Divine Man is only one since pre-existence till eternity, and that sacred self is Prophet Mohammad himself who has been manifesting in this world in all Prophets, Messengers and successors since Prophet Adam till Prophet Jesus. After the seal of Prophethood he would be manifesting in the forms of al-Ghawth, al-Qutb, al-Abdal (greatest ranks of Fakirs) and the Saints of Allah with all great levels. (Fusus al-Hikam)

In every era Prophet Mohammad keeps changing his physical dress and manifests in the beings of distinguished and perfect men. (Fusus al-Hikam)

May Allah protect us from following the misled thoughts and beliefs and grant us strength to gain gnosis of most exalted Mohammadan reality. Ameen

It is written by Faiza Saeed Sarwari Qadri and is now translated in English by Sofia Sultan Sarwari Qadri. Translator has used American English vocabulary in the translation of this article. If you wish to read the original article, please visit:

Allah created the universe and manifested His Lordship for Holy Prophet. As He says is a Qudsi Hadith:

If (O beloved) it was not for you; I would not have created the universe.

How is it possible that the universe still exists. Its system is also running but the one for whom the universe was created is not alive. Whoever believes that Holy Prophet is not alive is disgraced in both the worlds. Sultan Bahoo says about such a person:

How can such a person belong to the umma of Holy Prophet who denies his eternal life. Whoever he is, is a liar, faithless and an absolute hypocrite. The Holy Prophet said: