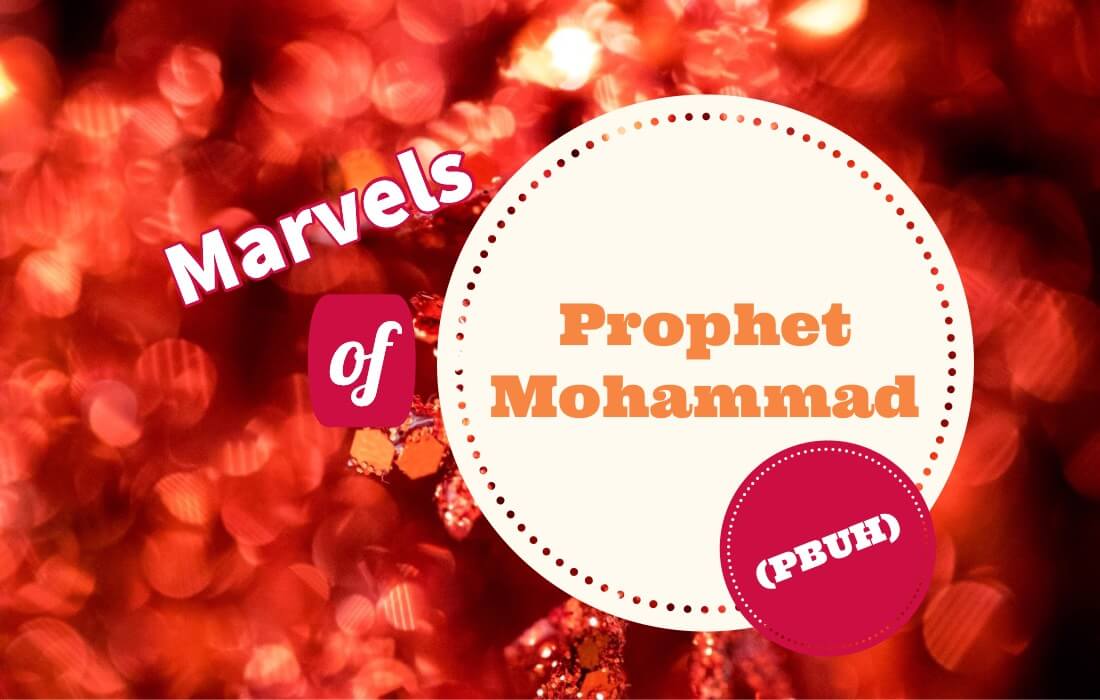 Marvels mean unique attributes and qualities or those matters and actions which are unique to an entity. In other words, one cannot find these distinct characteristics in any other individual. The Creator of the universe sent His messengers and spiritually elevated people like Saints and Murshids into this world. These messengers then acted as a source of guidance for human beings. Therefore, Allah granted these elected spiritually elevated people with certain attributes and endowments that distinguished them from common people. In short, such unique attributes and characteristics are the marvels of these sacred entities.

Similar to other prophets, when Allah sent his beloved prophet Mohammad as His messenger, He blessed him with several marvels. In fact, He inscribed in his sacred being all unique qualities and marvels beheld by the spiritually elevated ones. Indeed, Allah bestowed him with countless honours, titles, miracles and authorities which were unique and only one of their kind. In the following paragraphs, we have mentioned some of the marvels of Prophet Mohammad:

The First in Creation

The Prophet Mohammad (pbuh) is the first creation of Allah’s universe. Hence, the source and inception of the entire universe and the creation is the sacred self of Mohammad (pbuh). In fact, the universe and creation were not existent yet when Allah manifested his beloved Prophet Mohammad from the oblivion realm to the realm of creation. To tell the truth Prophet Mohammad (peace be upon him) is actually the wish of Allah. The an-Nur (light) of Allah first of all manifested in the an-nur of Prophet Mohammad. Then the whole universe came into existence from the an-nur of Prophet in stages. In short, as regards his creation, he is the first. However, regarding his revelation as a Prophet in the realm of physical world he is the last.

As Allah says in sura al-Hadid of the Quran:

Meaning: He is the First and Last and the Obvious and Hidden, (and) he possesses the knowledge of each and everything. (57:3)

The honest exegetes have explained that Allah revealed the above verse to express the grandeur of Prophet Mohammad.

Prophet Mohammad is the Divine an-Nur

Meaning: O Jabir, indeed Allah created the an-Nur of your Prophet (peace be upon him) earlier than everything else.

Creation is from an-Nur of Prophet Mohammad

In this regard the Holy Prophet says the following:

Meaning: I am from Allah’s an-Nur and all the creatures are from my an-Nur.

Reason for Creation of Universe

Undoubtedly, Allah created the cosmos and every creation only because of Prophet Mohammad. Moreover, He manifested Himself upon all the creatures that He is their Rab, Master and Creator only because of Prophet Mohammad. In other words, if Mohammad was not meant to be created Allah would not have manifested Himself. Neither were there any creation nor realms. As Allah Himself tells His Prophet in a Qudsi Hadith:

Meaning: If it was not for you (O My beloved Mohammad) I would not have created the universe.

Hence, he is the reason for the creation of universe.

A poet very beautifully expressed that the creation of universe owes to the existence of Prophet. He says the following:

Meaning: O Prophet! The Creator of both the worlds takes pride in your existence. As your existence is the cause of creation of the universe.

The following verse of Holy Quran verifies that Prophet Mohammad is the mercy for the whole universe and creation. Moreover, it is also signifying that the sacred being of Prophet is the first creation of Allah.

Meaning: And (O Prophet) We sent you as mercy for the people. (al-Anbiya-107)

If we ponder in reference to above verse, then one can see many stages of Prophet’s mercy. In fact, Allah Almighty utilized them in the creation and expansion of the universe.

The first favour upon any creation is that Allah brought it from the realm of non-existence to the realm of physical world. Moreover, the continuous existence of the creation, rather gradually reaching its excellence is nothing less than a benevolence. Wisdom justifies that any entity can favour or grace something only when it already exists. Hence, Prophet Mohammad existed when Allah had yet created no other creation. By virtue of Prophet Mohammad, He created the entire universe and sent Prophet Mohammad as a mercy for the creation.

Meaning: The lovers perceive him as the first and the last in their state of rapturous love. To them, he is the verses, surahs and the Quran as well i.e. he is the subject of the Book, he is the writer as well as the content, in fact, he is the whole book.

References by the Companions

“Regarding creation I am the first among all the Prophets and the last regarding my revelation.” (Dalail an-Nubuwwah)

Meaning: O Prophet! May my parents be sacrificed upon you! Just tell me, which thing Allah created first? On this Prophet replied “O Jabir! Indeed, Allah created the an-Nur of your Prophet from His own an-Nur before the creation of entire creatures. That Divine an-Nur has been revolving around by the Divine Will. At that time, there was neither heaven nor hell, neither angels nor sky, neither the sun nor moon and neither jinn’s nor human beings. (Precisely, there was nothing at all).” (Zarqani, Volume 1, Page 46)

Umar relates that the Holy Prophet said the following to him:

“I was an-Nur in the court of my Sustainer fourteen thousand years before the birth of Adam.”

Meaning: The Holy Prophet asked the angel Jibreel (Gabriel), “How many years of your age have you spent”. The angel replied, “By God! I know nothing except that a star of an-Nur rises after every seventy thousand years in the fourth layer of the veils of Divine An-Nur. And I have seen that star seventy-two thousand times.” Then the Prophet uttered, “O Gabriel! By the Honour of God, that star is me”. (Jawahir-ul-Bihar Vol-2, Ruh-ul-Bayan Vol.2, Seerat-e-Halbiya Vol.1)

“O Abu Bakr! I swear upon Allah who has ordained me in the path of righteousness. Indeed, no one knows my reality but Allah.”

First and Last in Prophethood

Just as Prophet Mohammad has the privilege of being first in creation, similarly he is also the first prophet of Allah. The following Hadiths verifies it:

Hence, proved that Allah ordained Prophet Mohammad at the exalted status of prophethood since eternity. Undoubtedly, he was the Prophet of Allah even before the creation of Adam.

Shaikh Mohiyyuddin Ibn-e-Arabi has given a beautiful example of Prophet’s being as the first and last. In this regard he says that a trader wraps his treasure with carpets and fills them with several layers of pieces of clothes. When he unfolds the carpet, the piece of cloth which he placed first of all, will come out in the end.

Further, he writes in his book Shajrat-ul-Kaun:

“The fact of the revelation of the Holy Prophet is such that his soul came into being first of all. However, he came in the world (as a prophet) in the last. Hence, he is called the first and the last.”

In the realm of souls, Allah ordained all prophets with prophethood. At that time Allah took oath from the souls of these prophets to embrace the prophethood of Prophet Mohammad. As Allah says the following in Quran:

Meaning: And (O Prophet of Allah! Remember that time when Allah made (His) covenant with the prophets. (He said:) Behold that which I have given you of the Scripture and knowledge. And afterward, there will come unto you a messenger, confirming that which you possess. You shall believe in him and you shall help him. He said: Do you agree, and will you take up My substantial oath (which I lay upon you) in this (matter)? They answered: We agree. He said: Then bear your witness. I will be a witness with you. (al-Imran-81)

The above verse verifies that all prophets at first embraced the prophethood of Mohammad. Afterward, by virtue of that faith, Allah bestowed the favour of prophethood upon them.

Prophet Mohammad is a Source of Guidance for Entire Humanity

As Allah says in Quran:

Meaning: And (O Mohammad) We sent you as a bringer of good tidings and a warner unto all mankind. (34:28)

At another occasion in Quran, Allah says the following:

Meaning: Blessed is He Who has revealed (Quran) unto His slave (beloved Prophet Mohammad) the Criterion (of right and wrong). That he may be a warner to the people.

Meaning: (Allah) sent every prophet for specific nation. However, (He) sent me as His messenger for (the guidance of) masses.

At another occasion Prophet Mohammad said the following:

Meaning: I have been sent as the messenger of Allah for all creations from eternity to the eternity.

The an-Nur of Prophet Existed when there was Nothing

In Bukhari (a book of Hadiths), it is referred that the Holy Prophet stated as follows:

“Whatever Allah wrote in Umm al-Kitab fifty thousand years before He created skies and the earth and when the empyrean of His reign and kingdom were merely over water in the material world, one of the statements He wrote in it was Mohammad is the last of all the Prophets”.

Hazrat Mohiyyuddin Ibn-e-Arabi describes in Futuhat al-Makkiyyah (chapter 10) about this verse: “The Prophet Mohammad is the First, the Last, the Obvious and the Hidden and is the knower of everything.”

The Mohammadan Reality Per Sultan-ul-Ashiqeen

Our Beloved Murshid Sultan-ul-Ashiqeen says the following while explaining the Mohammadan reality:

If Allah did not mean to create Mohammad, then He would not have manifested Himself. Neither He would have created any creation nor alams (realms). Allah had existed but nobody would have been available to call him Rab or pray to Him. His Lordship would not have been revealed nor would He have manifested Himself. So, the sacred being of Mohammad is the cause of the creation of everything. By one aspect he is the Essence of Haq (righteousness) Himself but simultaneously he is the sacred self of Mohammad. In reality, they are not two different or separate entities. Rather if thought profoundly, in spite of their being two entities apparently, they are same and similar. (Haqeeqat-e-Mohammadiya)

The standard of having complete faith is to have ardent love, loyalty and complete obedience to Prophet Mohammad. As mentioned before, he (pbuh) is the reason for the creation of the universe. In fact, He called Himself Rab, Master and Creator only because of Prophet Mohammad. Otherwise, Allah would not have manifested Himself from the realm of Solitude to the realm of the physical world.

‘Khasais-e-Mustafa’ is an Urdu article of the magazine “Mahnama Sultan-ul-Faqr Lahore” for the month of April. Originally penned by Saima Wajad Sarwari Qadri and is presently in English by Fatima Noor Sarwari Qadri exclusively for the website. Do not forget to visit the original article to which you only have to click the link given below: