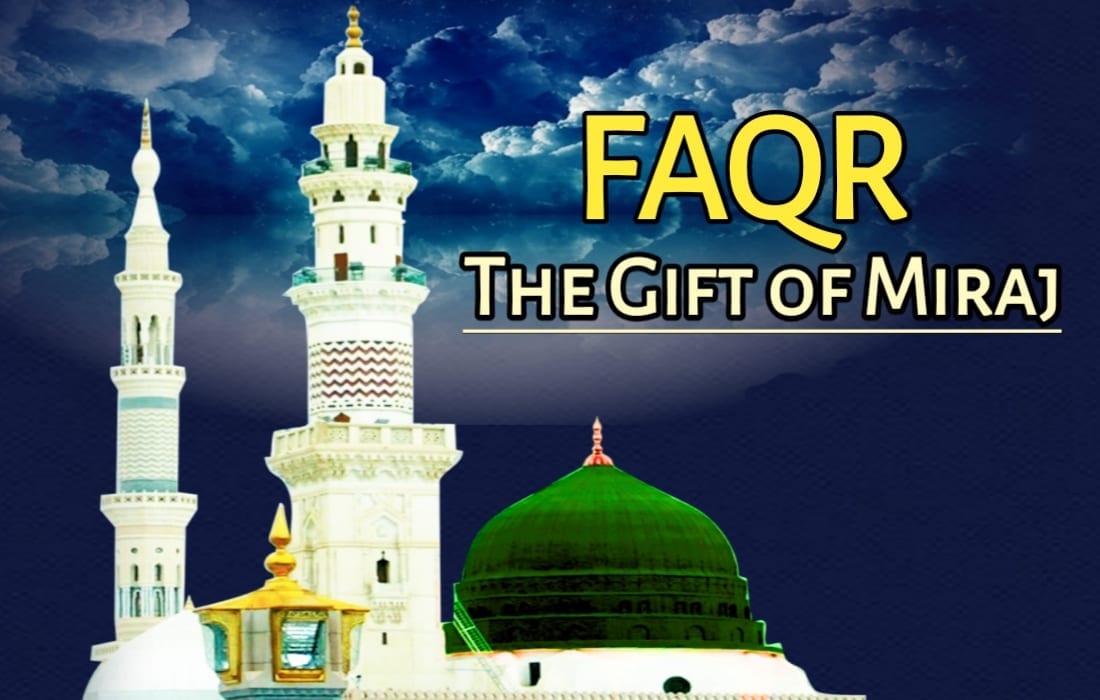 The Gift of Miraj

The incident of Miraj is the evidence of the unmatched grandeur, glory and excellence of Prophet Mohammad. History witnesses that whenever an extraordinary incident happens, it has some hidden wisdom. Everyone understands it according to his intellect. This understanding depends upon the closeness between Allah and that person.

If Allah had summoned the Holy Prophet beyond the heavens and presented all the splendors, every spiritual status and every creation of land and water before him and had replete him with His Glory and Grace had He not asked him that:

“O My honorable guest! Demand anything from Me today. I will not return you empty handed.”

It is world’s tradition that if anyone comes to a royal court and the king becomes happy with him due to any of his quality then the king asks him to demand anything he wants. The person would surely ask the king according to his grandeur.

Allah is the King of both the worlds. Had He not admired his beloved Prophet Mohammad? Had He not presented before him the keys to everything? Surely He had, because no one is more bountiful and benevolent than Allah. At the night of Miraj Allah limitlessly bestowed everyone from the Ummah of Prophet Mohammad, whether common or special. According to early traditions, the gifts which Allah gave at the night of Miraj were:

The gifts of Allah at the night of Miraj

We cannot understand the significance of the gifts of Miraj unless we do not know the background behind this special event. The incident of Miraj happened three years before migration. That was the time when the preaching of the Holy Prophet was at a stage between struggle and success. He had to face the boycott by the Makkans and their brutalities while his stay in the valley of Abu Talib.  He suffered calamities like the death of his beloved wife Khadija-tul-Kubra and uncle Abu Talib.  The journey to Taif for preaching was also a terrible one. The harsh attitude of his relatives was also exceeding its limits.

On one hand the Muslims were silently fighting for their survival and on the other hand it was also essential to make them believe that Allah is truth and there is no precedent for what He has for his steadfast men. The luxuries and profits of this transitory world are trivial.

The inspirations that came from journey of Miraj

The journey of Miraj inspired the human who is confined to this physical world to explore the world. It gave the hope to the seekers of Allah who were travelling the spiritual journey to meet Him. Also, it persuaded the Universal Divine Man to discover the inward and outward.

Sayings of Sultan Bahoo about the gift of Miraj

Sultan Bahoo says about the present which Allah granted His special seekers on the night of Miraj:

“O My beloved Mohammad, I have presented the eighteen thousand worlds before you and entrusted all the creations to you, what do you like the best among them and what do you wish to have? He replied humbly, “O my Lord! I like Faqr, Divine vision and Ism-e-Allah Zaat the most and I seek You from You”. Allah said, “O Mohammad, you have already got Faqr, Divine vision and Ism-e-Allah Zaat”. He replied, “O Allah, the King of universe, I want this for my Ummah” (Ain-ul-Faqr)

“At the night of Miraj the Holy Prophet rode Buraq and angel Gabriel escorted him. During this journey Allah adorned both the worlds for His beloved. Gabriel presented eighteen thousand worlds, decorated, before the Holy Prophet. At the lote tree (Sidra-tul-Muntaha), Gabriel stopped moving forward.

In spite of all these arrangements the Holy Prophet did not take his eyes away from Allah Almighty. Allah says:

Meaning: His eye neither inclined aside nor overstepped the limit; (it gazed in ecstasy at Whom it was to gaze).(53:17)

The Holy Prophet got the blessing of Faqr

The Holy Prophet did not pay any attention to these arrangements and when he reached the lote tree of heaven, he beheld the countenance of Faqr. He enjoyed the levels of Sultan-ul-Faqr, adorned his inward with Divine light of Faqr. Then Allah honoured him with his closeness at the level of Qab-a-Qausain and had conversation with Him. Then he entered the next level of Faqr i.e. annihilation in Allah and became the companion of Faqr. Allah, after that attributed him with the attributes such as mysticism, Divine love, passion, ecstasy, knowledge, clemency and generosity. As Allah says:

Meaning: Be attributed with the attributes of Allah.

After crossing all these levels and reaching at the height of Faqr when Prophet Mohammad was replete with the ocean of Faqr, he said with his pearl divulging tongue:

“Faqr is my pride and Faqr is from me”

Holy Prophet returned to his Companions after Miraj

After the journey of Miraj, the Holy Prophet returned to the assembly of his Companions. When the reality of Faqr manifested from his existence which is an ocean of Faqr, then most of the companions desired the Mohammadan Faqr. Hence Allah said:

“O Mohammad, always pay attention to these Fakirs and never keep your eyes away from them because they ever remain drowned in the remembrance of Allah.”

“All praises to Allah, now I will never become oblivious from obeying this command of Allah.” (Mehak-ul-Faqr-Kalan)

Allah made obligatory fifty salats daily for every common and special Muslim which afterwards lessened to five and the Mohammadan Ummah was blessed with Faqr and Ism-e-Allah Zaat for the knowledge of Divine Vision. Faqr is the most special and valuable blessing for which all the Prophets desired to be included in the Ummah of Prophet Mohammad. Faqr is a special present which Allah blessed the sinful Ummah of Prophet Mohammad only because of him.

All the Prophets desired Faqr

“All the Prophets desired Faqr but could not attain it. Only the Holy Prophet could acquire it which he conferred to his Ummah.” (Ameer-ul-Kaunain)

Meaning: Faqr is the name of passion, ecstasy, surrender and submission to the Divine will. It is the legacy of Prophet Mohammad and we are the heirs of this legacy.

Presence of inward is the real Miraj

Faqr and presence of inward is the true soul of salats and all the religious devotions. The Holy Prophet said:

Meaning: There is no salat without the presence of inward.

Salat is Miraj for a true believer

As the Holy Prophet said:

Salat of men whose inward is not present

“Following is said about those who say their salat in the manner that neither they are blessed with the vision of Allah in their inward nor their inward is present before Allah while offering salat:

The seeker who does not behold Allah while offering salat and doing other jobs, and does not even recognize Allah nor remains present before Him eternally, has not achieved his objective. He is still a seeker of Allah not the lover of Allah.” (Sultan-ul-Waham)

“Hence, it is clear that one can rarely gain the closeness and union of Allah by physical worships and outward good deeds. As a Saint said:

Meaning: No doubt! Offering salat, recitation of Quran, performing Hajj and paying zakat are good deeds but the marvel of a true seeker of Allah is to reach the ultimate destination (i.e. union with Allah).” (Sultan-ul-Waham)

Faqr is the soul of all the worships and is the special gift of Miraj which the Holy Prophet asked for his Ummah. Hence, it is compulsory for his every follower to desire Faqr through his medium so that Allah may guide him upon the path towards Himself. Amin

Faqr – The gift of Miraj is an Urdu article of the magazine “Mahnama Sultan-ul-Faqr Lahore” for the month of March 2019. Originally penned by Faiza Gulzar Sarwari Qadri is presently in English by Zainab Moghees Sarwari Qadri exclusively for the website. Do not forget to visit the original article to which you only have to click the link