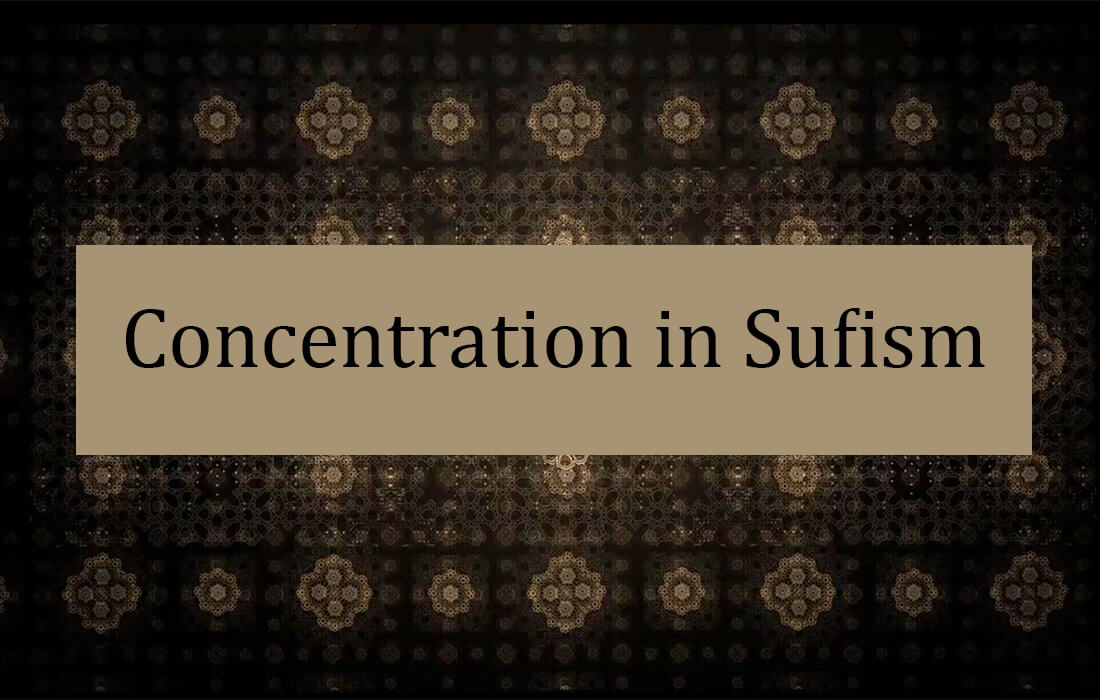 Concentration and prudence are Arabic words whose linguistic meanings are to think and reflect.  Actually, reflection is that cognitive power and light in man that can grant observation of the esoteric aspect of anything physical and the hidden of anything visible. This process is concentration in Sufism. The Arabic word for concentration in Sufism is tafakkur and when we use its plural i.e. tafakkurat, the meaning changes to ‘worries’. This is a world of worries. And concentration can make it better. Actually tafakkur is a positive act and a kind of worship.

Allah Almighty has ordered at many places in the Holy Quran to reflect upon the universe and His signs to become aware of the hidden mysteries, this awareness will result in the Divine gnosis as well as help in determining one’s own transitory value in the universe. The topic of Holy Quran is ‘human’ and the Quran instructs him many times to use the power of thinking, concentration and prudence to be aware of whatever occurs around him and to use the power of consciousness and observation granted by Allah so that the concealed secrets of the universe can be revealed upon him. The existence of man itself is a big sign of Allah’s greatness. Man can gain the Divine gnosis of his Creator and Lord only by concentrating upon his being. As Allah says:

Meaning: And there are many signs in the earth for the people with the truth of certitude (i.e. people of perfect certitude) and in your selves (as well). So do you not notice? (51: 20-21)

There are countless signs in this vast universe for man to concentrate upon so that he understands its Creator and Master. Concentration and prudence are Allah’s command because the doors to contemplation do not open without concentration. Man’s development stops if these doors remain closed and the history of human evolution gets lost in darkness. Not only did Muslims make great progress in the fields of science due to concentration and prudence during their journey of development but they also motivated humanity to explore the universe under the light of the Holy Quran. So, many amazing inventions came into play during this era. And sciences got such strong foundations on which the foundations of many new sciences were laid.

Whichever country progressed, did it due to research, reflection and inventions. That is why concentration, refection and research are the Quranic way of thinking.

Man’s concentration works in two ways, one way looks at the outward. But when one focuses on a detail and the inward of that thing, the concentration, curiosity and research reach its inward and pulls the hidden abilities and science to the surface and as a result some invention comes into existence. The entire knowledge about everything lies in the human brain. Concentration, reflection, rumination and research are the medium to reach and gain it. For example, the knowledge on the internet was present many years before, but researchers concentrated and this knowledge came to us and now the entire world is connected because of this.

Wrapping a great book such as the Holy Quran with a beautiful silk cover and putting it on a high place, kissing it reverently day and night and then disobeying its actual teachings….. Is this the way of Muslims? Does Quran not demand from us ‘Why do you not contemplate?’

Concentration and Prudence about the Universe in the Light of Quran

In these verses, Muslims have been ordered to think about their Lord and presence in His Assembly in every state. Whether they are standing, sitting or lying down. Allah has also ordered to concentrate upon the creation of heavens and earth.

A very important goal of the revelation of Quran is to invite people to concentrate and contemplate. Abul Kalam Azad has written in his famous book ‘Tarjuman ul Quran’:

Concentration in the Light of Hadiths

The Holy Prophet (pbuh) has declared a moment of concentration greater than a year of worship. There must be wisdom behind this. But we have still become careless towards concentration. Isn’t this devaluation of intelligence?  Isn’t this being unthankful towards Allah’s blessings!! Why did Allah give us intellect? We should use it but why do we not? Why have we forgotten the great blessing of concentration? Just think… Just understand!

What are we gaining by practically neglecting Allah Almighty’s great blessing and what reward will we get? The procedure of concentration is that we contemplate about something, ponder upon its system. As a result, It will show the reflections of Allah’s greatness. The doors to realities and secrets of the universe will open. When all the wisdom is revealed, man will exclaim “‘O our Lord You have not created (all) this without any rationale and strategy.” (3: 191)

Concentration in the Light of the Teachings of Saints

Hazrat Ali (ra) said while explaining the importance of concentration and prudence:

Man will learn the reality that this universe and everything in it is following a system and law in a particular manner and discipline only if man uses his wisdom and insight. And there is nothing that does not have expedience behind it, as Allah says:

Concentration is of two types, positive and negative.

Hazrat Ali says, “I recognized my Lord after my intentions shattered”. This is positive concentration. The one by which man comes to know about who he is? What his limits are? What his worth is? Positive concentration improves the personality of man and becomes the medium for the emergence of the best personality. Hence they remain steadfast even in tough situations.

Negative concentration is like a running sore for man and his personality. It throws his growing conscious into the prison of deprivation and makes his personality negative. It aggravates his ego. He becomes a victim to malice, lying, arrogance, jealousy and many other inner diseases. If you focus on the story of Adam and Satan, you will see that malice, lying, arrogance and jealousy had rooted in Satan. And arrogance started growing inside him due to which he didn’t obey Allah’s order. Satan concentrated on negative points and made it a matter of ego. A stubborn personality developed inside him and he remained biased which caused him to get banished from Allah’s court. It is a tragedy in today’s society that everyone focuses on negative details and no one concentrates on the positive points. Which is why diseases like rage, malice, lying, arrogance, and jealousy have surfaced.

The initial concentration is better than the worship of one year. As the thinker starts invocation and reflection, he suffers from an extreme fear of death and then never forgets death. He breaks all hopes from worldly life and considers himself a traveller every moment.

Although during this concentration at times honour, at times surprise, at times the majestic absorption, at times trance of the Beauty occupies the seeker spiritually. In such circumstances the man of observation and Divine union should remain alert. As at this station due to the spiritual occupation of invocation and extreme intoxication some seekers are dominated by paganism, polytheism and ego. Consequently the seekers suffering from frenzy of egoism are accursed by heavens like Satan. To be persistent on the Divine path, it is essential to focus and concentrate on Ism-e-Allah Zaat and the truth of certainty.

He says that concentration is a result of the Saints’ persuasion and training. And that the secrets of inward cannot be revealed without the favour of man of inward (perfect spiritual guide). That perfect spiritual guide who inwardly pledges allegiance to the Holy Prophet (pbuh) and gets the permission from him to bestow Ism-e-Allah Zaat.

Concentration leads to the light of gnosis. Concentration can be individual as well as collective. A nation destroys itself if it does not concentrate and ponder. Many nations have faced Allah’s wrath in the forms of earthquakes, rain of rocks, floods and storms, sectarian disputes and massacre, etc. These are various forms of Allah’s wrath. But the biggest of Allah’s wrath is the deprivation from concentration and reflection, hence the entire nation is left dumb and unsound.

Another way to reflect is self-accountability meaning to keep analyzing your own deeds.

The Perfect Spiritual Guide of this Era

Sultan-ul-Ashiqeen Sultan Mohammad Najib-ur-Rehman is the Perfect Spiritual Guide of this era. He grants seekers the Ism-e-Allah Zaat­ with or without allegiance. And trains them through its invocation and contemplation and turns them into men of concentration. He says:

May Allah favour us to walk the path of Faqr with perseverance! Ameen.

Q.1 What is Concentration in Sufism?

Concentration means to ponder over something to have its knowledge and understanding. Actually, reflection is the cognitive power and light in man that can grant observation of the esoteric aspect of anything physical and the hidden of anything visible. This process is concentration in Sufism.

Q.2 What is the Difference between Meditation and Concentration?

Meditation usually needs seclusion and closed eyes while one can concentrate whenever and however he wants.

This blog is English translation of an Urdu article of the magazine “Mahnama Sultan-ul-Faqr Lahore” for the month of February, 2016. The title of the Urdu article is: