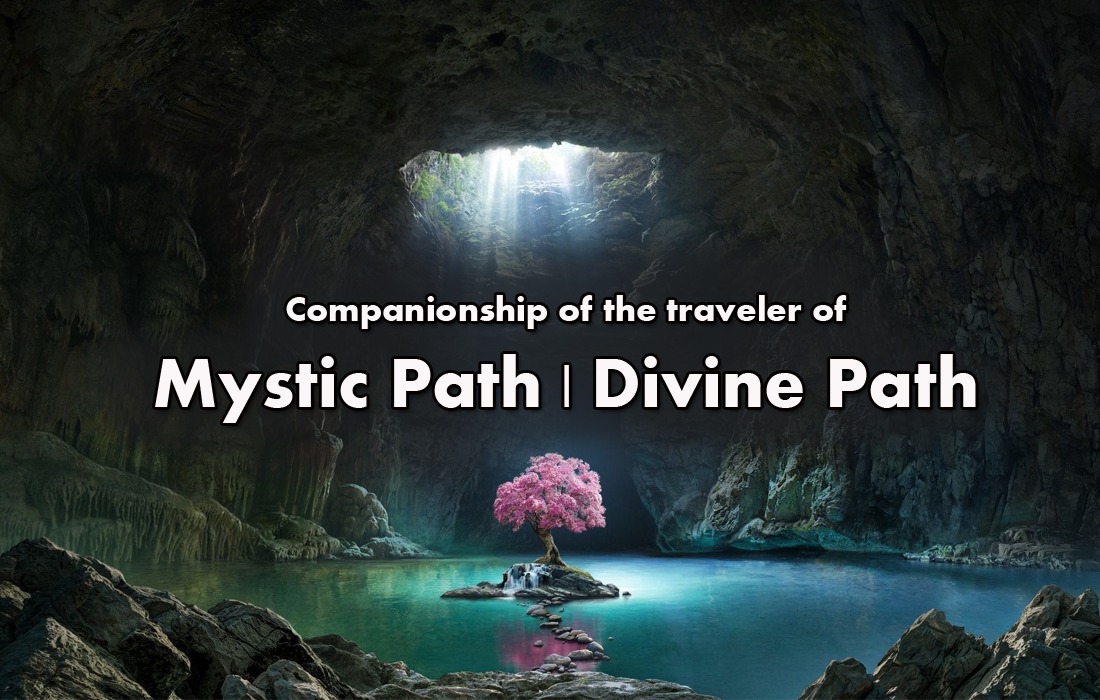 Companionship of the travelers of Mystic path

Companionship has a profound effect on a person’s moral, social, individual and collective life. It is companionship that makes a person worthy or non-worthy.

Here food refers to the knowledge of marifa which is food of soul.

Companionship with True Believers is a Sign of Faith

Companionship and intimacy with true believers and pious ones bow seed of Divine love in heart. Therefore, it is incumbent upon a true believer that he does not make such friends and companion whose religion and faith is subject to suspicion. Rather he should adopt the company of a person who has higher Divine proximity or keeps striving for it. There is no good in the companionship of those who are oblivious to Him and are slave of their desires.

Which Friend Is Best?

The Holy Prophet was asked: “Which of our companions are best?” He replied: “One whose countenance reminds you of your Lord.

Meaning: Surely, those who believed and did pious deeds, the Most Kind (Lord) will create love for them in the hearts (of the people). (Maryam: 96)‏

Here believers refer to true seekers (sacred Companions and all the pious men who came after them). They adopt the Companionship of true servants of Allah (Fakirs) for Divine proximity and nearness. In present age, these true seekers are called disciples or Divine seekers and their all the mystic endeavours for Divine nearness are their good deeds. When these disciples (travelers of Mystic path) interact with each other for the fulfillment of their duties toward their Lord then He, the Almighty, creates love, empathy and compassion in their hearts.

About their collective unity the Quran states:

Meaning: And always support one another in (the works of) righteousness and piety, but do not become accomplices in (works of) sin and transgression. And fear Allah persistently. (Al-Maidah: 2)

Importance of Companionship of the travelers of Mystic path

Verily, all those who embrace Islam are brothers in religion but seekers of truth and travelers of Faqr, the true and real soul of Islam are the most glorious. Their mutual relationship is called companionship of the travelers of Mystic path. This relation is not the inception of present era but it was initiated by Lord of both the worlds, Light of Divinity, Sovereign of both the worlds Prophet Mohammad fourteen hundred years ago in the early days of prophethood.

When the beloveds of Allah settled in the land of Madina by His command and raised their slogan of Truth, Islam emerged as an organized religion. It was the time when the Holy Prophet bound them in brotherhood. And this Holy congregation, under the kind supervision of their beloved Murshid and the Universal Divine Man, Prophet Mohammad, began to reach the height of Faqr (Sufism) and Mysticism in order to attain Divine nearness and proximity. These travelers of Mystic path set exceptional examples of compassion, brotherhood, kindness and self-sacrifice during their companionship.

Rewards Are For Those Who Cooperate In Religious Matters

Meaning: And the Emigrants and their Supporters (Ansar), the vanguard of the believers, and those who follow them in the grade of spiritual excellence—Allah is well-pleased with them (all) and they (all) are well-pleased with Him. And He has prepared for them Gardens with rivers flowing under them. They will live in them forever. This is indeed a colossal achievement.‏ (Al-Tawbah: 100)

Meaning: Mohammad (blessings and peace be upon him) is the Messenger of Allah. And those with him are hard and tough against the disbelievers but kind-hearted and merciful amongst themselves. (Al-Fath: 29)

Drawbacks of Deviation from the Companionship of travelers of Mystic path

When a true believer separates from his Muslim brother or does not cooperate with him in religious matters, this act is one of the most undesirable deeds in the Divine court. In such a case, the state of esoteric self of the one who separated himself from a true believer can also get worse.

The negativity of bad people clouds the thoughts and actions of a seeker (traveler of Mystic path). As a result, his good deeds become hollow. So, the companionship and association with bad people should be avoided.

Companionship of Wrongdoer Led to Astray

Regarding those who refuse to have companionship of good people (traveler of Mystic path), the Quran says:

Meaning: And that Day, every wrongdoer will bite his hands (in fury and frustration and) will say: ‘Would that I had taken the path (of guidance by joining) the companionship of the Holy Messenger (blessings and peace be upon him).‏ Ah! Woe to me! Would that I had not taken such a one for a friend. Surely, he led me astray from the direction and guidance after it had come to me, and Satan leaves man helpless and forlorn (in the time of distress).‏ (Al-Furqan: 27-29)

A Man Is Upon The Religion Of His Friend

It is very clear from the above quote that Allah does not like a hard-hearted and cruel man. Therefore, those who always remain busy in invocation and repent on their sins in His Holy court are under the throne of Divine mercy and His special grace and bounty is showered on them at all times.

A wise saying is:

Perfect spiritual guide, on the one hand is a source of unlimited spiritual authorities. On the other hand, he holds the honour of being at the footsteps of Prophet Mohammad. Therefore, he not only spiritually trains his disciples but also exoterically keeps them in brotherhood.

The perfect Fakir of present era, Sultan-ul-Ashiqeen Sultan Mohammad Najib-ur-Rehman is the possessor of unlimited spiritual authorities. Besides, he has peerless leadership qualities which cannot be counted. He, with the help of his spiritual authorities not only nurtured moral values in his disciples, but also he has instilled in them brotherhood, compassion and humanity.

Companionship Of Worldly People Takes Away The Soul Of Faith

As the love of this world takes away faith of a man, in the same way companionship of worldly people takes away the soul of faith. To nourish the soul of faith and to develop moral values in the travelers of Mystic path Sultan-ul-Ashiqeen has connected them through various spiritual endeavours. He is very soft hearted and kind to the creatures. Even he has forgotten his health and comfort for the betterment of mankind.

Sultan-ul-Ashiqeen organizes various spiritual gatherings for the esoteric and exoteric training of travelers of Mystic path. This not only purifies the innerselves of the attendees but also bestow them the permanent presence of Mohammadan Assembly after purgation of heart and brightening of soul. Moreover, it increases the passion of mutual brotherhood and they help each other in their duties towards their Creator.

Only a perfect Fakir is the real well-wisher and guide for mankind. His companionship lit the lamp of faith in the hearts and a passion for Divine proximity increases which elevates a man to the status of noblest of all the creatures.

Remember, sitting in the company of Saints is a source of blessing and it strengthens faith. The seeker who is lost in his own self and does not consider the company of a spiritual guide necessary can never gain the feelings of kindness and compassion.

The Path Of Saints Is That Of Holy Prophet

Explanation: Keep following the passionate lovers of Allah so that you may at least smell the wine of love if not the love itself. If you cannot even avail its fragrance then their sacred vision is also enough for you. (Sufism – The Soul of Islam)

Umar ibn al-Khattab said about the companionship of travelers of Mystic path:

In short, it is obligatory upon each traveler of Mystic path to sow the seed of Divine love in his heart and adopt the companionship of a perfect spiritual guide for moral progress and to consider sitting in the company of travelers of Mystic path as a blessing.

Meaning: (Call to mind) the Day when We shall call every section of people along with their leaders. (Bani Israel: 71)

The Companionship Of The Virtuous Will Surely Lead Man To Good