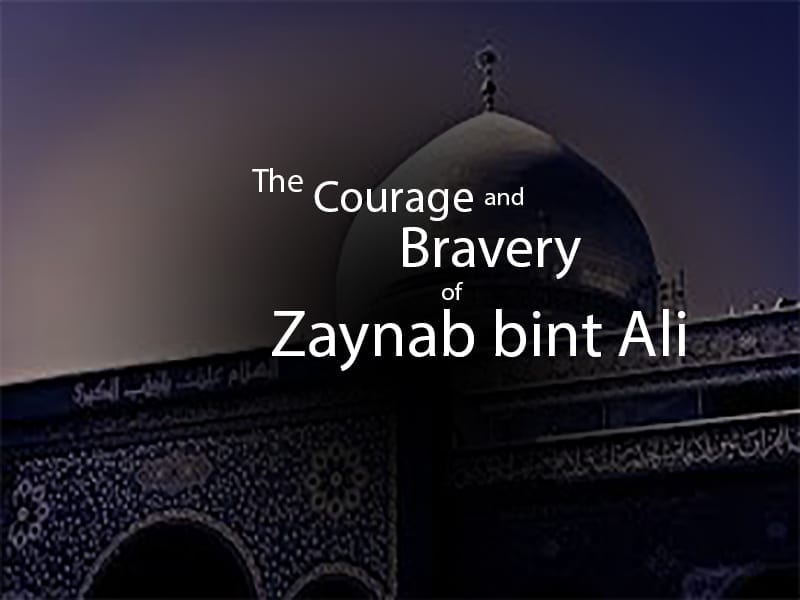 The Courage and Bravery of Zaynab bint Ali

Zaynab bint Ali razi Allah anha was born in Madina in the 5th year of Hijrah on 5th Jumada al-awwal. She was the daughter of Ali ibn Abi Talib and Fatimah bint Mohammad and the maternal granddaughter of the Holy Prophet sall’ Allahu alayhi wa’alihi wasallam. Zaynab is an influential and an honorable personality of Islam. She was named by the Holy Prophet. The name Zaynab is a compound of two words “zayn” (adornment) and “ab” (father), meaning “adornment of the father”. Zaynab resembled Ali ibn Abi Talib razi Allah anhu in features. She is the shining star in the history of Islam and humanity.

The history books report sixty-one titles of Zaynab razi Allah anha. The few famous ones are:

Zaynab spent her childhood in a virtuous environment of excellence which was surrounded by marvels from all directions. The prophethood and leadership shadowed her childhood every moment and celestial values encircled it. Prophet Mohammad sall’ Allahu alayhi wa’alihi wasallam blessed her with spiritual favors and also strengthened the foundations of her reflective brought up with his great character.

Alongside prophethood, the successor of leadership Ali ibn Abi Talib filled her with knowledge and wisdom. In a like manner, Fatima bint Mohammad brought her up with such marvels and excellence that Zaynab bint Ali became a picture of purification and purgation of innerself. Also, living in the kind company of Husnain (Hussan ibn ali and Husayn ibn Ali) since childhood laid such foundations of her celestial brought up that her childhood became a bright example.

The achievements of Zaynab bint Ali

After the incident of Karbala Zaynab bint Ali stayed in Damascus with People of the Cloak. The way Zaynab exhibited perseverance, valor, sacrifice, struggle against enemies, and the support for religion is unmatchable. Her journey with Husayn ibn Ali from Madina to Makkah and from there to Karbala is indeed a remarkable accomplishment. Not only she guarded orphans, widows, and children after the martyrdom of Husayn ibn Ali on 10th Moharram, but also exhibited patience at the agonizing martyrdom of People of the Cloak. The prominent achievements of her life also include:

Guarding and encouraging the prisoned and squandered caravan on their way to Kufa. Her peerless sermons in Kufa. The response to the insolence of ibn Zyad. Her journey towards Syria (Ash-Sham) and speaking her truth in the court of cursed of Yazid and in the bazaars of Syria. The eloquent sermons and apposite responses Zaynab looked as if Ali ibn Abi Talib was delivering sermons. Her bravery in saving Zayn al-Abidin’s life from the cruel hands of Ibn Ziyad. She stood with Husayn ibn Ali in his mission and came to be known as Sharikat al-Husayn (associated in the mission of Husayn ibn Ali).

Karbala and the bravery of Zaynab bint Ali

Zaynab bint Ali witnessed the war of Karabla from a high point which is to date known as “tila-zaynabiya”. When Husayn ibn Ali was martyred, she gathered Zayn al-Abidin and all women and children at one point. After the massacre, Yazid’s army went ahead and burnt the camps of People of the Cloak. The granddaughter of the Messenger of Allah was left alone by all means with the miserable caravan in a fiery dessert. She still kept the spirit of women and children while her own heart was weary of pains and sorrows.

The courageous sermons of Zaynab bint Ali shook the pillars of Yazid’s filthy governance and humiliated him in religion and world till doomsday. When her sight crossed the sacred head of her brother in the Yazid’s court she mourned with such woe that it trembled all the courtiers. She said:

The narrator while quoting this incident says that by Allah! All people present in cursed Yazid’s court began crying at the mourn of Zaynab bint Ali and Yazid became silent like a struck dumb.

The cursed Yazid commanded to bring a wood stick. Then he hit sacred lips and teeth of Husayn ibn Ali with it. Abu Burda Al-Aslami who was the Companion of the Holy Prophet addressed Yazid and said: O Yazid! You are hitting the sacred teeth of Fatima’s son with this stick? My eyes have seen the Holy Prophet kissing these sacred lips and teeth of Husayn and his brother Hassan ibn Ali and saying:

You are the leader of the youth of the heaven, may Allah ruin the one who kills you and send curse upon him and prepare hell for him and that is the worst place.

At this Yazid began to scream in anger and commanded to send Abu Burda Al-Aslami out.

Zaynab bint Ali couldn’t hold herself, she stood up and delivered a long sermon. She began by saying:

All praises to Allah Who is the Lord of the worlds. May the blessings of Allah be upon the Prophet Mohammad and his sacred progeny. Eventually those who stained their lives with evil deeds and destructed and made fun of the verses of their Lord will have a worse end.

O Yazid! Do you think you have narrowed the corners of earth and the boundaries of sky on us and that you have become successful in Allah’s court by tying the family of the Holy Prophet in ropes and chains and walking them door to door and we have become despicable? You think we have become disgraced by becoming oppressed and you became exalted by becoming oppressor? Do you think you have attained glory and rank in Allah’s court by tyrannizing us? Today you are happy of your apparent victory? Are you boasting in joy of your dominance and celebrating the joy of seizing our rights of succession? You must not be arrogant on your erroneous theory and act in your senses. Have you forgotten the saying of Allah:

And the disbelievers must never assume that the respite We are providing them is of any good to their souls. We are granting them (this) respite that they may grow further in sins. And (ultimately) there is for them a humiliating torment. (Al-Imran 178)

Allah will disgrace the oppressors

O Yazid! You must remember that by taking the revenge of the family of Prophet Mohammad, Allah will grant justice to the oppressed ones and will enrich them with the blessings of peace and tranquility. And Allah says:

And do not (ever) think that those who are slain in the way of Allah are dead. Rather, they are alive in the presence of their Lord and receive with sustenance from Him (comprising bounties of Paradise) (Al-Imran 169)

It is to regret that the companions of Satan and the disgraced ones put the soldiers of Allah and the graced ones to sword. To this point sacred drops of blood are dripping from the hands of your Satanic army. Wolves of desert are circling around the oppressed bodies of these sacred martyrs and filthy beasts of jungle are disgracing these purgated bodies.

Commit as much fraud as you wish an try your hardest, but you must know that you can neither obliterate us from the hearts of people nor can you fade the effects of revelation of Allah. Get rid of the thought that you will reach our glory through your hypocrisy. You will not be able to wash the ugly stain of the disgusting crime you have committed. Your ideology is weak and inferior, and your ruling days are few. All your devotees will leave your side. And you will be left with nothing but grief and distress on a day, when a voice will announce:

Curse of Allah be upon the oppressors.

Yazid sent the caravan back to Madina

Yazid struck with shock hearing the sermon of Zaynab bint Ali. In a fear of people standing with the family of the Holy Prophet against him he only found it suitable to send the caravan back to Madina. Therefore, he sent the caravan of People of the Cloak in Madina under the charge of Nu’man ibn Bashir al-Ansari razi Allah anhu.

Upon returning to Madina Zaynab bint Ali came to the sacred shrine of the Holy Prophet and these words came out of her sacred tongue:

“O my sacred grandfather! I have brought the news of martyr of your son, my brother. Your children were taken around the streets of Kufa and Damascus unveiled and tied in ropes.”

Then she came to the shrine of her mother and narrated the whole incident of Karbala achingly, and bewailed that even the hard hearts would pierce.

Extreme hardships broke princess Zaynab’s heart into pieces. When comfort became arduous for her in Madina. She went back to Damascus and there she died in sixty-two year of Hijra. This is how the guardian of orphans of People of the Cloak, the memory of martyrs of Karbala and an unexampled speaker fearing the enemies of the punishment of Allah united in heavens with her beloved and oppressed brother.

May Allah grant us the bravery, courage, and determination of Zaynab bint Ali. Her personality and the virtuous life is a guidance for all and specially women who tend to complain in difficult times and lose faith by being disappointed in the moments of distress.

سیدہ زینبؓ کی جرأت و شجاعت is an Urdu article of the magazine “Mahnama Sultan-ul-Faqr Lahore” for the month of September, 2019. Originally penned by Noreen Abdul Ghafoor Sarwari Qadri is presently in English by Sofia Sultan Sarwari Qadri exclusively for the website. Do not forget to visit the original article to which you only have to click the link: