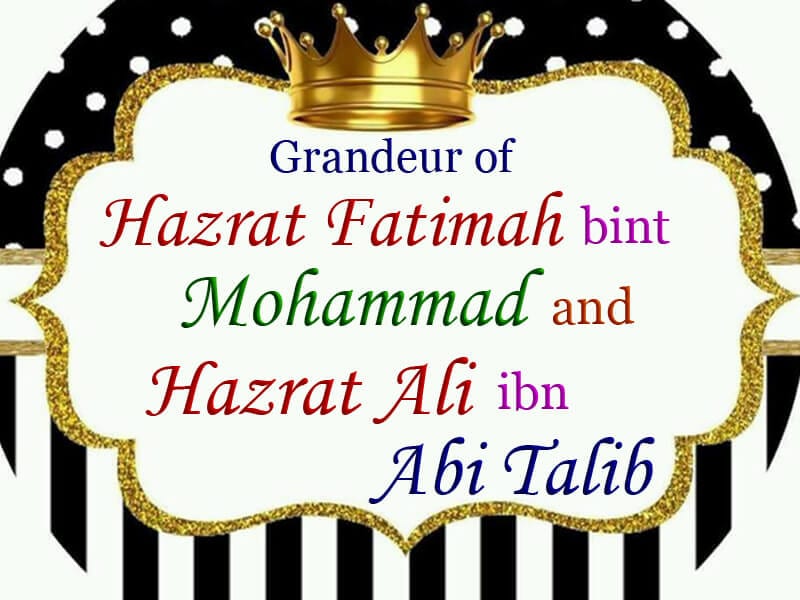 Fatimah is dearest to me. Whatever hurts her, also hurts me and whatever worries her, also worries me. (Musnad Ahmad ibn Hanbal)

Undoubtedly, Allah becomes angry with your anger and is pleased on your pleasure. (Mustadrak)

Fatimah is my branch (progeny). Therefore, whatever makes her happy, also makes me happy and whatever hurts her in fact hurts me.” (Musnad Ahmad ibn Hanbal)

Who is the dearest to Holy Prophet?

Then, I asked, “(who is dearest) in men?” She replied, “Her husband. In fact he is the man who keeps fast excessively and perform devotional prayers during night.”

The most beloved to Holy Prophet was Fatimah among women and Ali ibn Abi Talib among men.” (Tirmidhi)

O’ Holy Prophet! Who is more beloved to you among Fatimah and me?

Enemies of Fatimah are the enemy of Prophet Mohammad

The Prophet used to stand for welcoming Fatimah

Whenever Fatimah used to come to the assembly of Holy Prophet, he used to stand to welcome her. In addition, he used to kiss her hand and make her sit on his seat.”

Leader of all women in Paradise

What did Holy Prophet said to you?

She replied: I cannot disclose the secret of Holy Prophet.

After the death of Holy Prophet I again asked her about it, she replied:

In fact, he whispered that Angel Gabriel used to read complete Quran once a year. But in this year Gabriel has completed twice with me. I think these are my last moments. You will be the first one to meet me. This made me weep. Then Holy Prophet said:

O Fatimah! Do you not want to become the leader women of my umma. Or the leader of all the women who are true believers?” (Muslim)

There was an angel who never saw me. So that angel took permission from Allah. Then angel told me a good news that Fatima was the leader of all women of my nation.

An angel who had never descended to earth sought permission from Allah to come to greet me. Then he gave the good news that Fatimah is the leader of all women of paradise. Moreover, Hasan and Husayn are leaders of entire youth of paradise.” (Tirmidhi)

Prayer of Prophet Mohammad for Progeny of Fatimah and Ali

Holy Prophet told Ali on the night of marriage of Ali and Fatima, “Wait for my instruction before you go.” Then, Holy Prophet asked for water and performed ablution, then poured water on Ali and said:

O Allah! Bless them both and bless their progeny.

Undoubtedly, Allah has ordered me to marry Fatima with Ali.

I, you and these both (Hasan and Husayn) and this sleeping one (Ali had just awaken) will be on the same place on the Day of Judgement.” (Musnad Ahmad ibn Hanbal)

O Allah! I seek Your refuge for her and her progeny against Satan.” (Tabarani, Musnad Ahmad ibn Hanbal, Sahih Ibn Hibban)

Children of every mother are genealogically associated to their paternal side less the children of Fatimah. In fact, they are associated to me and I am their care taker”. (Mustadrak)

Undoubtedly, Allah will never give you and your progeny torment of fire.

Status on the Day of Judgment

On the Day of Judgement, an announcer will announce from behind the curtain: Lower your eyes so that Fatimah bint Mohammad may pass’.” (Tabarani)

You, Fatimah, Hasan and Husayn will enter the paradise first.

I asked, “O’ Prophet of Allah where will be our lovers?”

The Holy Prophet replied: They will be following you”. (Mustadrak)

I, Ali, Fatimah, Hasan, Husayn and our lovers will gather on same place on the Day of Resurrection. Moreover, we will also have food together while all the decisions will be taken.” (Tabrani)

Once, all wives of Holy Prophet were gathered with Holy Prophet, no one was absent among us. Meanwhile, Fatimah came. I swear upon Allah, her gait was just like the Holy Prophet.” (Ibn Majah)

In fact, I have never seen anyone resembling so much to the Holy Prophet in manners, personality, habits and etiquettes as Fatimah does.” (Tirmidhi, Abu Dawud)

In fact, I have never seen any person so similar to the Holy Prophet in way of speaking as is Fatimah.” (Bukhari, Nasai, Sahih Ibn Habban)

I used to look after Fatimah when she was sick and was near death bed. I noticed one morning she was looking a bit better. Ali went out to meet someone, Fatimah said “O mother! Bring water to me for taking bath.” I brought water for her. She took bath properly and said to me “O mother give me new dress.” I followed her instruction. She laid down while facing Holy Kaaba and put her hand below her sacred cheek and said, “O mother! I will die now, I am all pure now so no one to open me up (to give bath).” She died there. Umm Salamah says that afterward Ali ibn Abi Talib came back and she narrated her the incident.

Love of Fatimah is Salvation

Before leaving for the battle of Tabuk, the Prophet appointed Ali as his second in command in Madina. Ali said, “O Apostle of Allah! Are you leaving me behind among children and women?”

Are you not pleased that you hold same status for me as Aaron for Moses? But there would be no Prophet after me.” (Sahi Bukhari)

Lover of Allah and His Prophet

I heard the Prophet when he appointed Ali as his second in command at his place.  Ali said, “O Apostle of Allah! Are you leaving me behind among children and women?”

Are you not pleased that you hold same status for me as Aaron for Moses. But there would be no Prophet after me.

On the occasion of battle of Khaybar, I heard the Holy Prophet said:

So we all were anxiously waiting to seek this blessing, then the Holy Prophet said, ‘Bring Ali to me.’   Ali was called, he was suffering from conjunctivitis.

Holy Prophet applied his sacred saliva to his eyes and handed over the flag to him. Allah blessed Ali with victory in the battle of Khaybar. When this verse was revealed:

Meaning: ‘Say! Come, let us call our children and your children.’ (Al-Imran 61),

The Holy Prophet called Ali, Fatimah, Hasan and Husayn and said, ‘O Allah! They are my Progeny’.” (Muslim)

Love of Prophet for Ali

Allah, His Prophet and Angel Gabriel

One day Holy Prophet went to the home of Fatimah and Ali ibn Abi Talib was not there. He asked (Fatimah): Where is your cousin, son of your paternal uncle? She replied: We both confronted on something and he was bit annoyed due to it and left the home and did not has siesta at home even. Holy Prophet instructed someone: Go and search him that where is he?

It is translated in English by Mohammad Abdullah Sarwari Qadri exclusively for the website by the favor and guidance of Sultan-ul-Ashiqeen Hazrat Sakhi Sultan Mohammad Najib-ur-Rehman.